Maintaining a positive mindset through the mid-season vital. 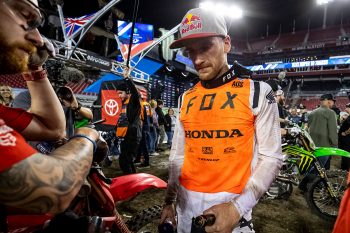 Roczen had held onto the lead since Anaheim 2, however, Kawasaki-mounted Tomac dislodged him from the top of the tables after claiming a third win of the year.

A third-place result for Roczen was still a strong way to bounce back from his sixth in San Diego, remounting following a crash in the main event to gain a podium result with Team Honda HRC. His state of mind will be critical through the mid-season.

“It’s a bummer to lose the points lead, but there’s a whole lot of racing left and overall I’m happy with how my day went,” recalled Roczen. “I was pretty consistent throughout the day – I just didn’t get the starts I needed.

“I lifted my body up too much, so I was a bit deeper in the pack and had to work my way up to the front. Then, ultimately, I tucked the front off the triple, which cost me a lot of time.

“I’m still happy to be back on the podium. I appreciate being up here, because on weekends like last weekend when I’m far away from it, it’s not so nice. No red plate for right now, but I’ll keep trying to fight back for it and keep a positive mindset.

“We’ll keep working during the week to get some consistency in and try to be up there from the beginning, because the lead guys were just too far gone by the time we got into fourth or fifth.”

It’s now Tomac who leads the 2020 standings following seven of 17 rounds, four points ahead of Roczen, who has taken five podiums in seven races including victory in St. Louis and a clean-sweep of the Glendale Triple Crown.