Assorted racer comments following the sixth round of Supercross.

In Quotebook, a selection of riders detail round six of the 2020 Monster Energy Supercross, an FIM World Championship, in San Diego. 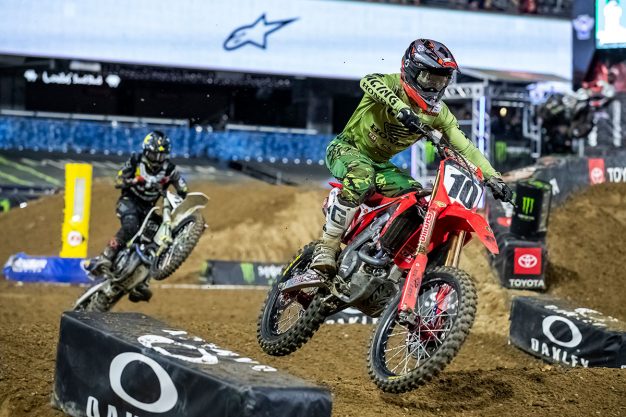 Cooper Webb (Red Bull KTM Factory Racing) – First:
I got into the lead early and then Adam [Cianciarulo] made a good aggressive move on the inside and I just kind of let him go. The track, I knew it was going to be hard to pass and I knew it was going to be a long Main Event so I was just kind of riding in there. I tried to make a pass a few laps earlier but we played cat and mouse which allowed Blake [Baggett] to catch up and I didn’t want to do that. It feels good late in the race to get that pass and the win tonight.

Justin Barcia (Monster Energy Yamaha Factory Racing) – Fifth:
We struggled a little bit in practice, but overcame that. I finally felt like I rode like myself in the heat race, but in the main event, I didn’t get the greatest of starts. I charged really hard the first few laps and diced it up in there. We ended up fifth, which was a really solid ride coming back from 15th. I felt like I rode well, the bike felt good so I’m definitely proud of the ride. The goal this week is to keep working on the riding stuff and shoot for getting another win here soon. We will keep moving forward. I’m definitely looking forward to Tampa.

Aaron Plessinger (Monster Energy Yamaha Factory Racing) – 10th:
San Diego was a big step in the right direction. I was kind of struggling in practice, but then we got the bike working really good in the final session. We went out for the Heat race and rode pretty well, ended up fifth. Then I got a great start in the main event. I was riding right with Cooper Webb and made a little mistake and went down right before the whoops. That cost me, but it’s good to get up there and run with those boys. Now I know I can do it. I’m looking forward to this week, we’re going to get back to Tallahassee and go do some more work to get ready for Tampa. I’m excited for it and looking for more up front rides like that.

Adam Cianciarulo (Monster Energy Kawasaki) – Second:
I’ve been waiting and working for this my entire career, to ride in the premier class and get on the big stage. I’m still learning, still improving every day, and I feel like I rode really well tonight. I led nearly every lap of the race but unfortunately got passed at the end so I’m a little disappointed I couldn’t hold Cooper [Webb] off just a little longer. Honestly, I’m just excited to be up front with such a talented group of guys and prove I can compete.

Eli Tomac (Monster Energy Kawasaki) – Fourth:
Well, I was challenged tonight after having to fight my way towards the front in the main. I didn’t have the best start, but we’ll get back to work with the Monster Energy Kawasaki team this week and hope to improve for Tampa next weekend. I do feel I rode well tonight and I’m proud we were able to make up quite a few positions to finish fourth on the night.

Ken Roczen (Team Honda HRC) – Sixth:
The night started off really well. I crushed it in the heat race and had an awesome start. Ultimately in the main, I got an okay-but-not-great jump and just got sandwiched in the first turn and again in the second turn, losing four more positions. It made for a tough race. I also got stuck behind [Justin] Barcia and just wasn’t riding well. Then [Eli] Tomac got me and from there on out, I was just going backwards. I lost touch with the front guys and wasn’t that good. Unfortunately, as much as we don’t like it, we all have those races and we did some damage control. It’s obviously not where we want to be but we’re heading to the East Coast still with the points lead, so that’s a positive. It’s still a long season ahead.

Justin Brayton (Team Honda HRC) – Seventh:
Today was pretty good. It was about standard for this season so far, but I do think my starts were better. They were good in the heat race and in qualifying; I just kind of messed up the main-event start and was a little wide. I was next to the box, which is normally good, but I think this time it was too wide. I feel like I executed the start good but just got pushed out. Overall I rode pretty well. Once again, I had to pass some good guys and it’s really hard to come through the pack, so I only made it up to seventh. I just need to put myself in a better position in the beginning and I know I can run up front and get a better result. 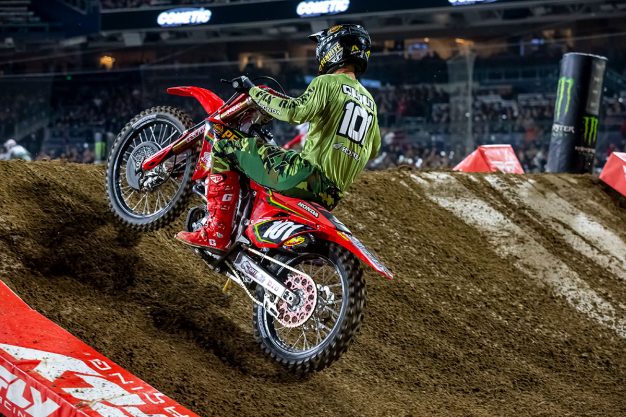 Justin Cooper (Monster Energy Star Yamaha Racing) – Third:
It was a good day overall, but I was a little bit off the pace. I felt like I got it together for the heat race. I was riding well, but I bent my shifter about halfway through. It was kind of scary for me because I was going in and out of gears, and I didn’t want to mess up and get hurt. I lost Dylan there and had to take second. In the main, I was right behind him, but lost the pace a little bit, and they got away. We were close, but we will keep working. I’m really looking to get out front in one of these Main Events and see what I can do.

Dylan Ferrandis (Monster Energy Star Yamaha Racing) – First:
I’m really happy. I felt good all day and got the fastest lap. It was another nice race with a big fight for the win. I’m glad I took it and am going into the break with the red plate and more points. Last year, I didn’t have this advantage leaving San Diego, so that’s really good. I’m in a good situation.

Austin Forkner (Monster Energy Pro Circuit Kawasaki) – Second:
Second is obviously not where I want to be. I’ve been leading laps and know the speed is there, but have missed it the past two weeks by just the tiniest little bit. I know I led more laps this week. It still doesn’t take away from wishing things had gone differently. We have a chance to regroup for a few weeks and see if there are any places that we can improve to make the outcome different. Because you can always improve.

Cameron McAdoo (Monster Energy Pro Circuit Kawasaki) – DNF:
It’s a bummer that I wasn’t able to see if I would have been able to get inside the top 10 tonight, but things happen. If anyone is looking forward to the break it’s me. I’m ready to get back to 100 percent so I can prove that I am able to run up front with my teammate and those guys. I’ve had a lot of positives that will keep me motivated in the off-weeks.

Luke Clout (Penrite Honda Racing) – Sixth:
I am still learning and improving each week. We were closer to the fastest guys in some areas this week, which is a real positive. I do need to string it all together – it really is another level over here. I am measuring myself against the other Australians and the fastest guys in the world, so I feel as though we are making serious progress.

Alex Martin (JGRMX Yoshimura Suzuki Factory Racing) – 10th:
San Diego was very up and down. I had some positive moments in practice, but I also had some pretty big crashes. The main event was going decently as we were near the top five, but towards the end a lapper cross-jumped me, taking me out. I’m looking to take advantage of this six-week break then capitalise on the last four rounds.