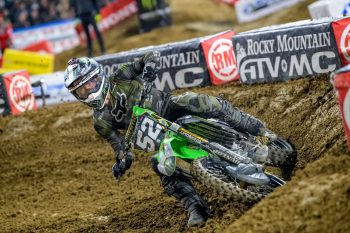 Monster Energy Pro Circuit Kawasaki’s Austin Forkner enters the six-week break for the western regional riders with his second consecutive runner-up finish. The track inside Petco Park was tight and fast with the fans being treated to a great race. Teammate Cameron McAdoo still has been managing his injuries but showed good speed all day before having to retire early with an issue, finishing 22nd.

To start the night, Forkner won his fourth heat race of the season. He continued his trend of good starts and came around the first lap of the main event in second. By the fifth lap, Forkner had moved into the lead. Before reaching the halfway point the riders started to encounter lapped riders, adding in another challenge on the tight and technical track. After Lap 16, Forkner was pushed wide and was forced off the track, moving him back to second. With it being late in the race, Forkner ran out of time to put in a charge, finishing in second.

“Second is obviously not where I want to be,” said Forkner. “I’ve been leading laps and know the speed is there, but have missed it the past two weeks by just the tiniest little bit. I know I led more laps this week. It still doesn’t take away from wishing things had gone differently. We have a chance to regroup for a few weeks and see if there are any places that we can improve to make the outcome different. Because you can always improve.”

McAdoo has turned heads with his tenacity to line up despite not being 100 percent. He’s been able to run up front, taking second in his heat race in San Diego. McAdoo put himself in a good position in the main after a solid start but had to finish the race on the sidelines when he came across an issue. Despite the setback, he still walked away with positives from the night.

“It’s a bummer that I wasn’t able to see if I would have been able to get inside the top 10 tonight, but things happen,” said McAdoo. “If anyone is looking forward to the break it’s me. I’m ready to get back to 100 percent so I can prove that I am able to run up front with my teammate and those guys. I’ve had a lot of positives that will keep me motivated in the off-weeks.”