Cooper ‘tired of the adversity’ after relinquishing 250SX red plate 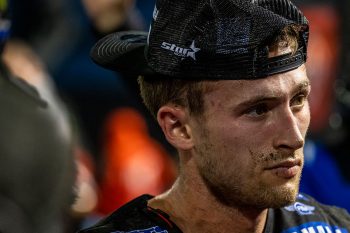 Cooper, who experienced a trouble-free opening three rounds of Supercross, endured a difficult night at Glendale’s fourth stop a week ago, where he crashed in main events one and two before winning the final of the Triple Crown.

His misfortune travelled to the Northern Californian round on Saturday night when he was forced to qualify for the main event via LCQ, which came after being taken down by Luke Clout (Penrite Honda Racing) in his heat.

“I’m just getting tired of the adversity out there,” Cooper admitted. “It’s good and it’s challenging – I just did what I had to do tonight. I did a lot of laps tonight and I was pretty smoked in that main. I just feel I settled into the wrong pace. It was pretty hard to pass out there, but I just took my time to focus on Alex [Martin]. I’m just happy to get a good start and stay up tonight.”

Monster Energy Supercross heads to San Diego this weekend for round six, marking the final 250SX West round until the regional series resumes in Seattle next month.