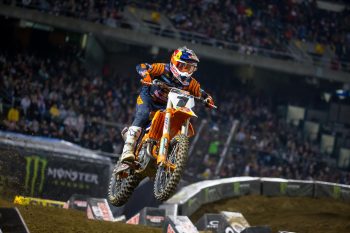 Red Bull KTM Factory Racing’s Cooper Webb secured his best finish of the season on Saturday with a spectacular last-corner pass to confirm second overall at Round 5 of the 2020 AMA Supercross Championship in Oakland, California.

After battling through a sickness in the early part of the season, the reigning 450SX Champion has began to hit his stride once again with a solid performance at the Ringcentral Coliseum.

Webb qualified third overall aboard the KTM 450 SX-F FACTORY EDITION, lining up in 450SX Heat 2. He got off to a top-five start in the heat and quickly worked his way into second. He rode a solid race to ultimately secure a second-place transfer into the Main Event. With a favorable gate pick, Webb got off to a fourth-place start in the Main Event and he rode steady in fourth for the first 17 laps of the race. With four laps to go, Webb made his move into third and from there he charged toward the second-place battle. He caught up to the second-place rider in the final laps and with only one turn to go before the finish, Webb took the inside line to make a last-minute pass on Ken Roczen to overtake second just before the checkered flag.

Cooper Webb: “I think I finally just raced ahead tonight. I think I’ve been just kind of conservative and not laying it out there like all these guys have been so today/tonight was a much better direction and I fought hard the whole Main Event. I still need a little there at the beginning but overall I’m pretty happy and I feel like I’m in a good spot moving forward.”