Whoop setting the cause of Barcia struggle at Anaheim 2 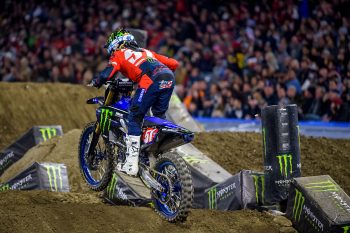 Former red plate-holder Justin Barcia has pin-pointed the technical whoop sections for his lack of form at Anaheim 2, unable to find a suitable setting on his factory YZ450F.

Barcia had been on the podium at the opening two rounds of 2020 Monster Energy Supercross, however, after qualifying 18th in the afternoon he eventually settled for ninth in the 450SX main event.

It was a result that cost the Monster Energy Yamaha rider the points lead which he’d held since winning A1, now second in the standings and only three points in arrears of Ken Roczen (Team Honda HRC).

“Anaheim 2 was a difficult one, to say the least,” Barcia said. “I really struggled in the whoops all day, also in the race. I definitely rode really smart, I didn’t want to lose too many points, so I managed the race as good as I could. Ninth was the best we had tonight.

“I tried really hard, rode as hard as I could but it just was a little bit of a struggle. We have some work to do for tracks with whoops like that. I’m just happy to get out of Anaheim healthy, that’s the biggest thing. In the past I haven’t been able to get through the first three rounds healthy, so we’re in a good position.

“We’re only three points down in the championship and I’m feeling good about that. I’m really excited for Glendale next weekend, I really like that track and stadium, so I’m just going to keep moving forward and get ready for the next race.”

Monster Energy Yamaha team manager Jim Perry also confirmed the bike set-up was costly for Barcia through the difficult whoop sections throughout the round at Anaheim 2.

“A2 was a tough day, but something to learn from and move forward,” stated Perry. “It was a very challenging track. The team worked hard making adjustments throughout the day, making improvements, but the set-up was off for that technical back-to-back whoops section.”