Clout and Oldenburg get their best finishes for 2020 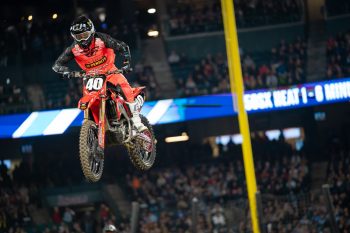 Luke Clout and Mitchell Oldenburg claimed their best overall finishes for 2020 despite their challenges.

Mitchell Oldenburg finished 2nd in his heat race for a second weekend in a row.

“My heat race start was good and I found my flow early on which was great. It’s been tough to find a rhythm as my weekly routine in nonexistent following my crash in A1. I haven’t been riding during the week”.

Penrite Honda’s Luke Clout didn’t have the heat race he had hoped for; he crashed in the opening laps which resulted in a trip to the last chance qualifier.

“I felt good in the opening laps, the boys made a change to my suspension between qualifying and racing and I was strong in the whoops. I passed Alex Martin for 4th and was gunning down 3rd. Unfortunately I crashed and had to go to the LCQ. I just rode quick enough in the LCQ to make the main”.

In the main event Luke started well and settled into a comfortable rhythm. The race was crazy and hectic. In the opening laps Mitchell collected a track marker (tough block) which resulted in a crash. He remounted quickly and charged hard. He was 17th on lap one and came back to 7th place. Luke had a career best finish, a 6th in the final, which has put him inside the top 10 overall in points.

“I am ok with my 6th but I have a lot of work to do. The team has been great; they are giving me everything I need. It’s different over here. I know that doesn’t make sense to some people, but the tracks are different, they are prepared differently, they develop ruts and have moisture in them. The intensity is much higher. In Australia we were doing 8 lap races and over here I am doing 18 laps. We have a plan and we are working towards it” said Clout.

Mitchell has had to contend with an injury he sustained in round 1 and is working towards getting back to where he wants to be.

“I am happy with how I came through the pack tonight. There are some positives to take from the first few rounds. We have moved to 9th in the championship and trail the top 5 by 12 points. The bike is incredible. Our starts have been great and I am enjoying the Honda. I need to get 100% healthy. I know we have a good program, we will continue to work forward” concluded Mitchell.

This weekend coming is round 4 of the championship. It will take place in State Farm’s Stadium, Glendale. The team will continue to invest in building on their current form. The team also will release a limited edition Australia Day graphic for this weekend as well as a fund raising promotion to raise money for victims of the bush fires in Australia.