Decision a precautionary measure according to Team Honda HRC. 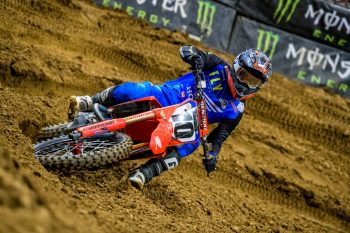 Team Honda HRC’s Justin Brayton was forced to overcome an emergency engine swap at round two of 2020 Monster Energy Supercross in St. Louis, where his team ensured he made the LCQ after completing the task in under 25 minutes.

Brayton initially experienced a problem during his heat, prompting the team to switch out the CRF450R engine as a precautionary measure.

“It was a stressful situation, for sure,” said crew chief Lars Lindstrom. “Going from heat two to the LCQ is probably the shortest amount of time you have in the night and then to swap an engine was intense. It was also making that split-second decision, deciding if that was actually what we were going to do.

“We could’ve probably taken the risk and changed some parts and hoped for the best, but for our comfort and Justin’s, the only thing that was going to ease our minds was putting a new engine in.

“I was pretty confident we were going to be able to get it done, but it was high-stress. It’s that situation that you don’t want to be in but might have to be, so it was also a learning opportunity for everyone on the team.”

In what was essentially a home race for Brayton, the Iowa native rewarded his team’s efforts by winning the LCQ and then going onto claim a respectable eighth in the 24-lap main event.

“Definitely a wild night,” Brayton reflected. “I never want to go to the LCQ, but I actually enjoyed it a bit. Under those circumstances, you just try to make the best of it and it was kind of nice to get out there and win it, plus get to ride the track so close to the main event.

“I hope I don’t have to go to another one though! I’m super proud of the team to be able to get me back out there. Main event-wise, I was still able to get a pretty good start from the far outside gate. I ran inside the top 10 for the whole race, finishing eighth, which isn’t where I would like to be by any means.

“But still an overall good start to the season with the adversity both weekends. Hopefully another cleaner weekend next week at A2 and I’m really hoping to be in the top five, then build up to some podium finishes.”

Monster Energy Supercross returns to Anaheim’s Angel Stadium this Saturday night for round three of the series. Brayton is currently ninth in the standings after going P8 at both rounds to date.