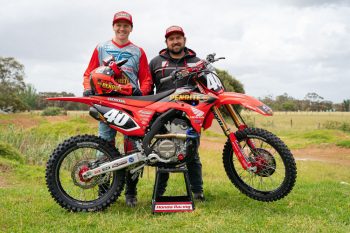 Oldenburg contested the 2019 Australian Supercross Championship aboard the team’s CRF250R, picking up a pair of race wins on his way to third in the standings.

“They are a great team and have had great success in Australia since 2003, so it’s awesome they are heading over to the States to take on West coast and that I get to be part of it,” Oldenburg explained.

“Consistency is integral and I feel we have great bikes, a great team of people and some excellent partners. The biggest thing for me is the bike – I feel we can do well on it.

“My dad had me on Honda’s most of my amateur career and I had a lot of success. I know they build great bikes and the 2020 250 is awesome. I got great starts in Australia and I hope to continue that heading into West coast.”

Oldenburg will be joined by Australian revelation Luke Clout for the first five rounds before he returns home for his assault in the MX Nationals series.