Assorted racer comments following the latest round of the season.

In Quotebook, a selection of riders detail how their races played out at the latest round of the 2023 Monster Energy Supercross Championship in San Diego. 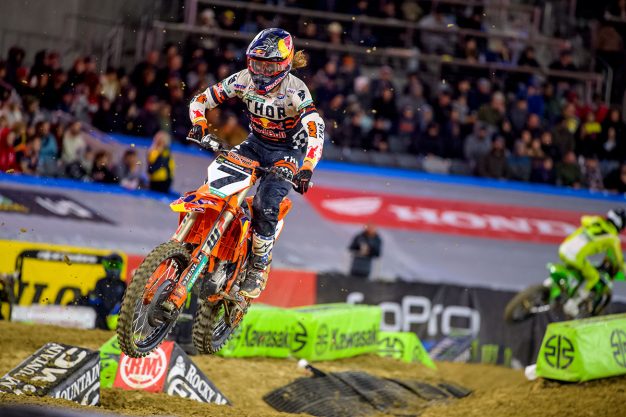 Eli Tomac (Monster Energy Yamaha Star Racing) – First:
It was another great race for us. I was able to come out with the holeshot and the heat race win, then in the main event, I didn’t get the holeshot this time, but I was right there. I made a couple of key passes on that first lap and then got to Cooper [Webb]. I had a couple of better lines and was able to get the momentum up the dragon back and made a block pass there. I rode some good laps in the middle of the race, but then toward the end, I got a little bit stuck behind some lappers. Some races are easier than others to get around guys, but it’s just the way it goes when you’re the lead guy. When you’ve got a guy like Cooper right behind you, it does not make your life easy, but I kept pushing. It was good that I had that little bit of a gap because he was pretty close in the end, but overall, it was another fantastic race for us with this new motorcycle.

Dylan Ferrandis (Monster Energy Yamaha Star Racing) – Sixth:
Overall, the day went well. I felt good all day and got a good start in practice. Going into the night show, I was feeling pretty decent. I got a good start in the heat race, but then I made a small mistake, and it was difficult for me to feel good after that. In the main event, it was kind of the opposite – I got a bad start and came back through the field. It’s very frustrating for me since I try very hard to be the best I can be. We need to analyze this with the team and come back stronger in Anaheim.

Jason Anderson (Monster Energy Kawasaki) – Seventh:
I had a positive start to the day, setting the fastest lap time in the first qualifying session. However, the starts proved crucial tonight on the technical track layout, forcing me to work my way back through the pack in both my heat and main event races. Still, I felt comfortable with the KX450SR as the night progressed, but unfortunately a small mistake during the main event cost me a podium position. I am confident in the performance of my race bike and my training and will keep grinding this week to improve and be more competitive next weekend.

Adam Cianciarulo (Monster Energy Kawasaki) – Eighth:
Overall, I’m pleased with my performance tonight, particularly my strong starts and ability to contend with the lead group in the main event. There certainly is still room for improvement but, I believe tonight marked a step forward from my previous race. I will keep working hard week by week and with the support from the fans and the team at Monster Energy Kawasaki, aim for an even better race next weekend.

Cooper Webb (Red Bull KTM) – Second:
Tonight was good, I got off the start strong and that was key in the way the track developed. I was able to lead some laps, which was cool, but the pace was pretty strong and I made a few mistakes in the middle of the race. The lapped riders helped me in the end to edge closer to Eli [Tomac] and it was pretty hectic with all that going on, so it was a tight finish, but overall I’m happy with how the season has started and am looking to push forward from here. It was positive for me to see what it takes to win at this point of the year, being so close tonight, so we’ll learn from the few mistakes and keep fighting on.

Aaron Plessinger (Red Bull KTM) – Ninth:
San Diego was a challenging day for me, even if the result was close to round one. Although practice didn’t go as planned, I was riding good in the heat race, got a pretty good start, and then got caught up in a crash that I couldn’t avoid, so came from dead last to sixth in that. In the main event, I got a horrible start and worked my way back to ninth, which is not what we wanted, but we’ll get better as we go. I have to focus on starts this week and come out swinging when we head back to Anaheim.

Justin Barcia (TLD Red Bull GasGas) – Third:
In the heat race I was hitting the whoops really well, and staying with Eli, which was sick. Towards the end I had a few mistakes and Anderson got around me good, which was a bummer. But I ended up third and got a solid gate pick. In the main event, I got off to a good start. There was a lot of pressure, and some awesome battles. It was super-gnarly and the track broke down a lot, but I ended up third. I had a lot of fun, and I’m stoked to regroup before heading into Anaheim 2.

Chase Sexton (Team Honda HRC) – Fifth:
San Diego was a little bit eventful for me. I qualified second but had a big crash in the heat race and had to DNF. I went to my first LCQ ever but was able to get through there. I made the main event and was riding good but got taken down by another rider and fell back to 10th. I made my way back to fifth, but it was definitely a mediocre night. At least we’re healthy and we can try to come out swinging for A2.

Colt Nichols (Team Honda HRC) – 12th:
The night was difficult, to say the least. Once again, I got off the gate really well. I have a lot of confidence with this bike getting off the gate, which is reassuring, and something good I’ll take from tonight. After that, there weren’t a whole lot of positives. I just didn’t really have much intensity. I felt like I was just riding around, not really racing the track. I just need to be a little smarter, get some time under our belt. Overall, we live to fight another day. On to Anaheim.

Kyle Chisholm (Twisted Tea Suzuki) – 17th:
Little better week for me in general, having been so sick in Anaheim so just being healthy felt good. The day went okay… I got through practice, the heat race was good and I got a good start – it was nice to put some laps in up front a little bit. In the main event, I was pretty good for most of it, but I wasn’t really pumped with my riding. I need to get more comfortable and get back to work this week.

Shane McElrath (Twisted Tea Suzuki) – 16th:
Little bit dramatic getting to the main event, but it was really good to build. I rode with some intensity and started with decent times in the last qualifying practice. I had a good pace in the heat race going for a while but ended up stalling it, and I fell out of transfer position. I was disappointed in that. I had to go through the LCQ. The main event went well, I wanted to get some good ground under me to build upon, and we did that. So I’m excited to build on this round. 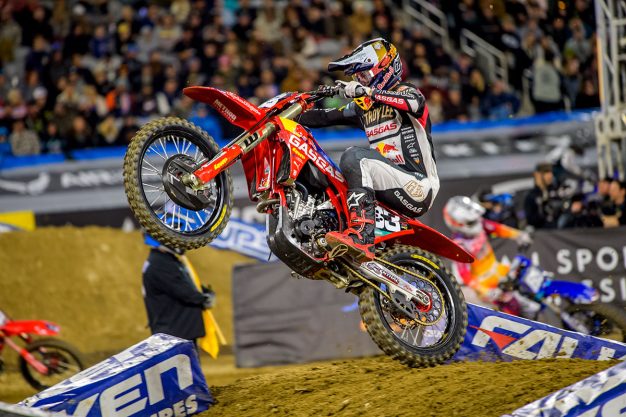 Levi Kitchen (Monster Energy Yamaha Star Racing) – DNF:
It was a good night until it wasn’t. I finally felt better on the bike, so I’m going to take away the positives from the weekend and rest up as much as I can to be ready for Anaheim 2.

Stilez Robertson (Monster Energy Yamaha Star Racing) – Sixth:
The day started off well. I was second in free practice and ultimately was seventh in the second qualifying, which wasn’t ideal. Then in the heat race, I was a little too lacksey-daisy but made some good adjustments for the main with the team. I thought we had a good start in the main event, and then I came over and someone hit me from behind. I came from way back to sixth and was really close to fifth place, but just couldn’t make it happen. All in all, I feel like I rode pretty well. It was definitely not an ideal situation, but I made a lot of passes and I felt good, so we know we’re trending in the right direction.

Cameron McAdoo (Monster Energy Pro Circuit Kawasaki) – Third:
It was a crazy heat race and I can’t believe after all that I ended up fifth. Thankfully in the main event the start was better. Overall, I need to execute better when it comes to a few things on the track because I think it ended up costing me second tonight. But I have to keep in mind that two podiums keep us in contention for the championship and we can focus on having a good week to come back to Anaheim strong.

RJ Hampshire (Rockstar Energy Husqvarna) – Second:
Man, it was a really solid day. I felt good on the bike literally from the time I sat on it before the first practice, I just had a good feeling. I went to P1 early and was battling for that top spot in qualifying, won my heat race, and then just had another solid main event. I’m stoked on where we’re at. Hopefully, we can figure out some things this week with my start and can battle more next weekend at Anaheim putting this Rockstar Husky back on the podium.

Max Vohland (Red Bull KTM) – DNQ:
Timed qualifying went well, being inside the top eight. In the first heat race I had a very bad start, made my way up to sixth, and then the red flag came out. On the restart I crashed in the first turn and, with only two laps to go, I was outside of the top nine and had to go to the LCQ. In the last chance, I worked my way up to a qualifying position, but then made a mistake on the last lap and went down, unfortunately putting me out of the main. Of course, I’m very disappointed, but I’m healthy and will be back at A2.

Pierce Brown (TLD Red Bull GasGas) – Fifth:
We have a lot to build from. I got third in qualifying, second in the heat, and then fifth in the main. I need to clean a bunch of stuff up to get closer to that front group and fight for some wins. But we made it out alive, so we’re going to get back to work this week and hopefully bounce back and build off of it next weekend.

Jett Lawrence (Team Honda HRC) – First:
This track was much more predictable compared to Anaheim – it was more racing this week compared to the last race, where we were more trail riding, and I had a blast being back at normal speed. My biggest thing is putting myself in a good position to podium or win every round, just going the smarter route, trying to make it through the night.

Dilan Schwartz (Progressive Ecstar Suzuki) – 19th:
Made big improvements from A1, just got to stay off the ground in the main event and we will get a better result. Feeling a lot more confident now, I have to put myself up there and run with the top guys, and we will get a good result