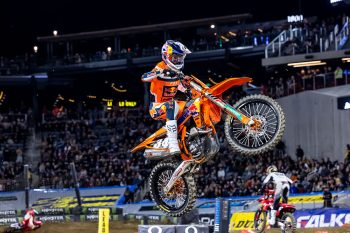 It was a night of misfortune for Red Bull KTM rider Maximus Vohland in San Diego, with falls at critical moments ultimately ruling him out from qualifying for the 250SX West main event altogether.

Vohland started this year’s Monster Energy Supercross Championship with a solid fifth at Anaheim 1 and qualified eighth-fastest ahead of the night show at Snapdragon Stadium.

A first-turn incident in the restarted opening heat saw him cross the line in 13th place. From there, he recovered from a poor start in the LCQ to make his way into a transfer position, only to go down in the final laps and finish in P8.

“Timed qualifying went well, being inside the top eight,” Vohland recalled. “In the first heat race, I had a very bad start, made my way up to sixth, and then the red flag came out.

“On the restart, I crashed in the first turn and, with only two laps to go, I was outside of the top nine and had to go to the LCQ. In the last chance, I worked my way up to a qualifying position, but then made a mistake on the last lap and went down, unfortunately putting me out of the main. Of course, I’m very disappointed, but I’m healthy and will be back at A2.”

This year marks Vohland’s third season with Red Bull KTM Factory Racing in the 250 class. With it being a contract year, he will be eager to deliver a strong showing when the season resumes this Saturday at Anaheim 2 and elevate from 12th in the standings.