Entry for Anaheim 2 this Saturday confirmed with nothing broken. 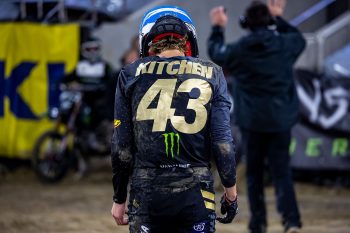 Kitchen, 21, tangled with teammate Stilez Robertson at the first turn in the opening lap and walked away from the crash in a visible amount of pain, holding his arm and wrist.

Other riders involved in the incident included Australian Wilson Todd (Fire Power Honda) and Mitchell Harrison (AJE Motorsport GasGas). Todd remounted to finish P17, Robertson – who stayed upright but dropped to the back of field – crossed the line sixth, while Kitchen and Harrison were unable to complete the race.

“It was a good night until it wasn’t,” Kitchen recalled. “I finally felt better on the bike, so I’m going to take away the positives from the weekend and rest up as much as I can to be ready for Anaheim 2.”

The number 43 finished seventh at Anaheim’s opener but following the disappointment at Snapdragon Stadium has dropped to 13th in the 250SX West standings. He will have the opportunity to rebound this Saturday when gates drop at Anaheim 2.