Perfect start to the season in Snapdragon Stadium Supercross debut. 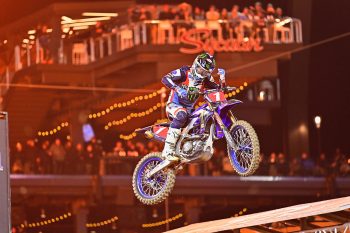 The Monster Energy Yamaha Star Racing rider too charge on lap five and went on to win by just 1.148s over a charging Cooper Webb (Red Bull KTM), who put pressure on in the closing laps.

While Tomac was convincing for a second-straight victory, Webb repeated his result from the opener and led his share of laps before Tomac went by and this time trailed him home to the end – not quite able to strike when it counted.

Third marked the first podium of the season for Justin Barcia (TLD Red Bull GasGas) equipped with the new generation MC 450F Factory Edition, benefiting from a mid-race mishap from Jason Anderson (Monster Energy Kawasaki) while he was in podium contention.

After leading the opening laps, Adam Cianciarulo (Monster Energy Kawasaki) was eighth, from Aaron Plessinger (Red Bull KTM) in ninth after being outside the top 15 on lap one, and Joey Savatgy (Rick Ware Racing) completed the top 10.

The hard luck story of the main event was Malcolm Stewart (Rockstar Energy Husqvarna), going down multiple times and eventually settling for 15th after qualifying quickest this afternoon and winning his heat race in spectacular fashion.

Leading into Anaheim 2 next Saturday night, Tomac now leads by six points over Webb, with Sexton still within reach, a further seven in arrears.