Western region podium replicates that of the opener two weeks ago. Red plate-holder Jett Lawrence was once again the class of the field in San Diego, extending his Monster Energy Supercross 250SX West points-lead with back-to-back victories to open his 2023 campaign.

Lawrence holeshot and led every lap for a 3.613s win on this occasion, topping a fast-finishing RJ Hampshire (Rockstar Energy Husqvarna), who in turn made a move on Cameron McAdoo (Monster Energy Pro Circuit Kawasaki) with two laps remaining.

It was a first turn incident involving Levi Kitchen (Monster Energy Yamaha Star Racing), Wilson Todd (Fire Power Honda) and Mitchell Harrison (AJE Motorsport GasGas) that ruined their races, but at the front it was all eyes on Team Honda HRC’s Lawrence.

There was yet again a convincing performance from Enzo Lopes (Muc-Off FXR ClubMX Yamaha) on his way to fourth position, with Pierce Brown (TLD Red Bull GasGas) returning after crashing out at Anaheim to earn P5.

Of the riders in the pile-up, Todd climbed to 17th, while both Kitchen and Harrison were ruled out altogether.

Two rounds into the season, Lawrence now leads by six points over the consistent Hampshire, with McAdoo a further four points back in third – replicating the podium from the opener a fortnight ago as we now look ahead to Anaheim 2 next Saturday. 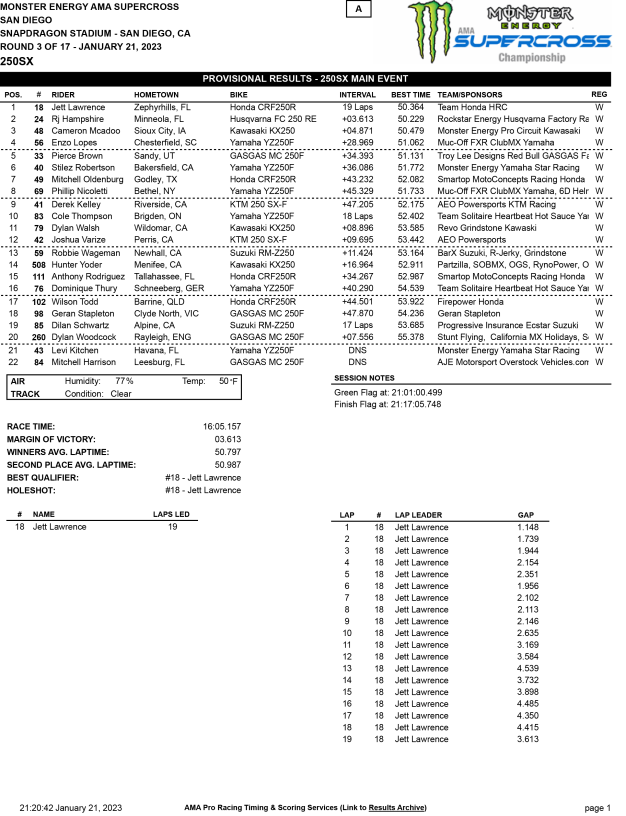