Wrist injury forces Frenchman to the sidelines for this weekend. 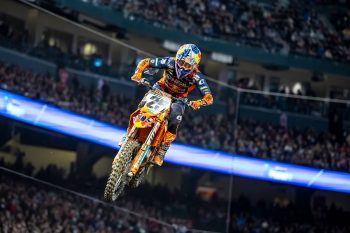 Red Bull KTM Factory Racing’s Marvin Musquin will sit out this weekend’s round of 2023 Monster Energy Supercross in San Diego after sustaining a wrist injury while practicing earlier this week.

Musquin, 33, experienced by his own accounts an underwhelming start to the SuperMotocross World Championship (SMX) season, finishing 12th in Anaheim 1’s opener.

Eager to turn things around in his 2023 campaign, Musquin fell while training in the extended interim between Supercross rounds and now is disappointingly forced to the sidelines, with the hope of returning as soon as possible.

“Red Bull KTM has confirmed that Marvin Musquin will miss this weekend’s San Diego Supercross due to a wrist injury sustained this week during practice,” KTM confirmed. “The Frenchmen is having his wrist evaluated by doctors and more information will come.”

The announcement leaves Cooper Webb and Aaron Plessinger to fly the 450SX flag for Red Bull KTM Factory Racing at SnapDragon Stadium, Webb finishing a promising second at A1, Plessinger P8. The team will also field Max Vohland in 250SX.