The most pivotal races on this year's domestic and international calendar.

To the satisfaction of riders and racing fans alike, last year saw the global motorsport calendar take a major step in returning to its complete state. With exciting developments across a number of series, 2023 is shaping to be even bigger and better, as MotoOnline outlines a mixture of key events on both a domestic and international scale in this Top 10 feature. 1. The SMX finals series:
Revolutionising the sport as we know it, a historic SuperMotocross World Championship has been formed by Feld Motor Sports and MX Sports Pro Racing, and commenced at Anaheim 1 this year. Operated in addition to both Supercross and Pro Motocross in the US with full factory involvement and a $10-million (USD) purse, the two companies jointly announced a landmark partnership that will see the series culminate at the Los Angeles Memorial Coliseum on Saturday, 14 October for the SuperMotocross World Championship finals. In terms of the format, the top 20 riders from combined Supercross and Pro Motocross standings will automatically be seeded into the SMX playoffs, which take place on hybrid SMX track designs. Riders in positions 21-30 overall, in addition to any rider who has won a main event/overall in either series will also be eligible, but will have to qualify for the 22-rider field within the remaining two gate picks. Leading into the playoffs, the points will be reset in both classes. The top 20 will be seeded into the playoffs using one event’s worth of Supercross points – 26 for the regular season points leader, 23 for second, 21 for third, 19 for fourth, then single point denominations to the 20th seed, making performance during the regular season crucial for playoff position. There will be two 20-minute motos in the SMX post-season using olympic scoring, where a tiered points-structure will see a maximum of 26 points awarded to the winner at the first of the playoff events, 52 points at the second and 78 points at the final round that will determine the ‘world champions’ of SMX. In total, the series spans 31 rounds, introducing a new strategy development for riders and teams to consider as anticipation continually builds to see what racing on these new hybrid track designs has to offer, come to the playoffs. Prior to the finals at LA Memorial Coliseum, SMX Playoff 1 will take place at zMAX Dragway in Concord on 9 September, North Carolina, and Playoff 2 will take place on 23 September at Chicagoland Speedway in Joliet Illinois.

2. MXoN in France:
The Motocross of Nations (MXoN) made a highly-welcome return to normality for the most part last year, with a hungry Team USA taking coveted the Chamberlain Trophy for the first time in 11 years thanks to the efforts of Eli Tomac (MXGP), Justin Cooper (MX2) and Chase Sexton (Open). For 2023, the event will be held in Ernee, France, and has all of the potential ingredients to be an absolute thriller. While line-ups have not been officially announced, Team France is firmly set on winning and regaining the Chamberlain Trophy on home soil after finishing P2 at RedBud. Team USA will be out to prove they can again win away from home, and the emerging Team Australia line-up has its sights firmly set on making history and standing tall at the famed event for the first ever time. Add in the potential of Jeffrey Herlings making a return with Team Netherlands and a host of hungry nations and riders looking for success, and the racing between 20-22 October is sure to be electric.

4. Supercross title-decider:
Salt Lake City’s Rice-Eccles Stadium will once again play host to the 17th and final round of AMA Supercross for 2023. After the Anaheim opener, the dominance of Tomac was astounding, and while it’s hard to predict the season off of a single round, it feels as though it wouldn’t be surprising to see Tomac get the job done and wrap the title up prior to the last round like he did a year ago. The past champions in the 450SX class will look to dethrone Tomac, as the likes of Red Bull KTM’s Cooper Webb and Monster Energy Kawasaki’s Jason Anderson aim to take back the crown. Eager to get the job done, Sexton will be one to look for as the series comes to it’s closing stages, proving that he has what it takes to challenge and beat Tomac, going bar-to-bar in motocross with the eventual champion in 2022. The anticipation continues to build following a rained-out second round in Oakland, as fans now look to San Diego this coming weekend to get a direction on which way this championship is going to head. Let’s hope it goes down to the final race of the year across 450SX and the 250SX regions.

5. Pro Motocross opener:
Southern California’s Fox Raceway will play host to the opening round of Pro Motocross, which is set to be a strange one. With Tomac not defending his 450MX championship, the addition of two-time 250MX champion Jett Lawrence is set to boost excitement to the class, as he he makes his premier class debut. Honda counterpart Sexton is sure to be a championship threat, proving to be one of, if not the only rider that had what it took to challenge Tomac week in and week out in 2022. The class will only field one past 450 champion, as Dylan Ferrandis (Monster Energy Yamaha Star Racing) sets out to take title number two. Last year saw Ferrandis sidelined for the majority of the season with injury, so look for him to come out with a head full of steam and try to rebound. And then there’s the 250 class, where you can expect to see the likes of Shimoda and Hunter Lawrence do battle once again, among a mixture of additional challengers including former double champion Martin aiming to contend. 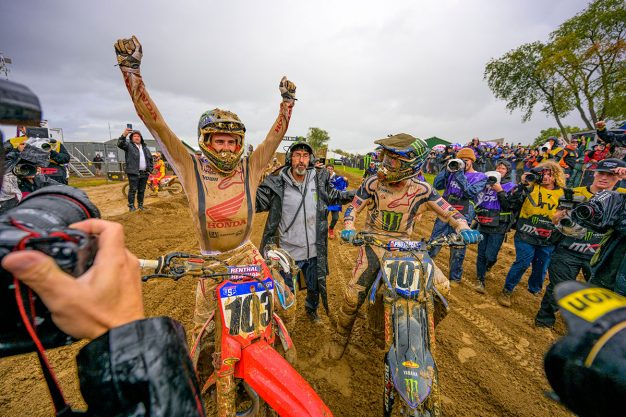 6. WSX Championship concludes in Melbourne:
In December 2021, the creators of the successful AUS-X Open were announced by the FIM as the promoters of the World Supercross Championship (WSX), commencing last year. With its two-round ‘pilot’ season complete, the series takes a step for 2023 and expands to six rounds, with the finals held at Marvel Stadium, Melbourne once more. The event last year was entertaining with the unique short back-to-back-to-back finals format providing intense racing. While it is unclear which marquee riders will compete in the series in 2023 due schedule clashes with other series, it will be intriguing to see who promoters SX Global and the teams can attract.

7. MXGP season commences at Villa La Angostura:
With marquee contenders such as Jeffrey Herlings (Red Bull KTM Factory Racing) and Romain Febvre (Kawasaki Racing Team) expected to be fighting fit and ready to compete in the complete 2023 MXGP World Championship, the upcoming season is shaping up to be a cracker. Last year saw Team HRC’s Tim Gajser storm to a dominant title victory, however, with his two main rivals from the season prior recovered and hungry for success, the title is sure to be hotly costed. The season-opening MXGP of Argentina acts as the first real form check, and will also see the maiden outing of Australia’s Mitch Evans on the world stage since making the switch to Kawasaki Racing Team. Adding to the list of contenders, you can never count out the fast-starting Jorge Prado (Red Bull GasGas Factory Racing), with Monster Energy Yamaha MXGP again boasting a highly-capable line-up of Jeremy Seewer, Glenn Coldenhoff and Maxime Renaux who enters his second season in the class after a highly impressive rookie campaign. Who brings speed into the new season? Will there be a changing of the guard? The answers will begin to take shape when gates drop at Villa La Angostura on 12 March.

8. Supercross Showdown number one:
The 250SX East/West Showdown races always provide intense racing, with quarter-litre contenders vying for outright bragging rights as the fastest 250cc Supercross rider in the series. East Rutherford hosts the first of two Showdowns this year on 23 April, relatively late in the Monster Energy Supercross Championship. It’s always exciting to see how the Lawrence brothers stack up after racing opposite coasts, with Hunter standing tall last year in the first Showdown at Atlanta. There is often talk and criticism surrounding which coast is more competitive, and which coast has the faster riders, but when the gates drop the outcome on track does the talking. Also, factoring in the new SMX structure this year, the Showdown rounds will act as a Supercross measuring stick for all 250 contenders ahead of the finals series taking place on hybrid track layouts later in the year.

9. 250SX heads east:
Following the opening five rounds of Supercross that sees 250SX West riders kickstart their season, 250SX East riders will get their time to shine as the series heads to NRG Stadium in Houston. The 250SX East series boasts a whole new field of riders, whom of which are chomping at the bit to showcase new bikes, new skills and also their progression in the extended pre-season. The eastern regional championship will see contenders such as Hunter Lawrence (Team Honda HRC), Jo Shimoda (Monster Energy Pro Circuit Kawasaki), Michael Mosiman (TLD Red Bull GasGas) and Jeremy Martin (Muc-Off FXR ClubMX Yamaha) all look to add an AMA Supercross title to their resume. The eastern region is stacked with experienced veterans, rookies and sophomores of the class, all whom of which share the same goal of winning the title. The favorites heading in surely have to be Lawrence and Shimoda, both riders have shown they have what it takes win races and piece together a championship.

10. Ironman final Pro Motocross push:
The final round of the Pro Motocross series this year holds extra significance. Not only will both 450MX and 250MX champions likely be crowned at Ironman Raceway on 26 August, but the concluding stop on the Pro Motocross calendar also marks the last round of SMX prior to the finals series commencing. Essentially, it provides riders one last chance to secure or improve their seed ahead of the playoffs. Despite the complete SMX season consisting of 31 rounds, every point counts and a last-minute improved seeding position could prove decisive, especially with the scores reset ahead of the finals series and each rider’s starting points total is dependent on their seed position.