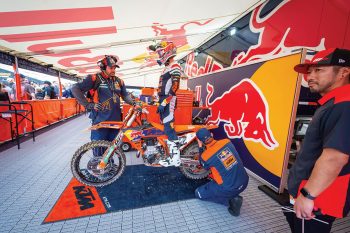 Use of MotoGP-specification data acquisition was pivotal in Red Bull KTM Factory Racing’s preparations for the 2023 season, assisting in finding improved base-settings.

Team manager Ian Harrison has revealed that the team utilized the technology from KTM’s factory MotoGP program and it resulted in a firm direction leading into Monster Energy Supercross this year.

Double 450SX champion Cooper Webb was left satisfied with that progression after finishing second at Anaheim 1 onboard the new generation 450 SX-F Factory Edition, however, the coming rounds will be telling if the team and Webb will be able to challenge for another title.

“Through our testing in the off-season and taking what we learned from Supercross, we were like we have just got to start with a blank page,” Harrison explained on SMX Insider. “We were lucky enough to get some data acquisition stuff from one of the MotoGP bikes, we put that all on a bike in the off-season, we got a good test rider and we just ran through every single setting that we had.

“I remember we were out there for a couple of days and it gets a little boring when you are going through all of these things, then all of a sudden I turn around and go, ‘what is that one?’. That is when we hit it. We found out our base, then we used that for moving forward and that was right about in the middle of November.

“From that data testing, having good people help us with it, we really figured out that the bike in general has a pretty broad setting base,” added Harrison. “If you go extreme one way or the other, then you can definitely fall off the edge. I think that is what happened in Supercross in 2022.

“We would go from one side to the extreme to the other side. Yes, the bike wasn’t perfect, but neither was Cooper, so it was a combination of both of them that I think contributed to the lack of results. Those things we learned from the data acquisition, we applied to all of the guys, we ran it to all of them, even though they are on different settings.”