Q&A: What we learned from Anaheim 1

Further breaking down the opening round of Supercross 2023.

Anaheim 1’s first round of the 2023 Monster Energy Supercross Championship saw the new season start on an even more chaotic note than usual. MotoOnline answers some of the primary questions that our team had from an intense night of racing in this edition of Q&A. 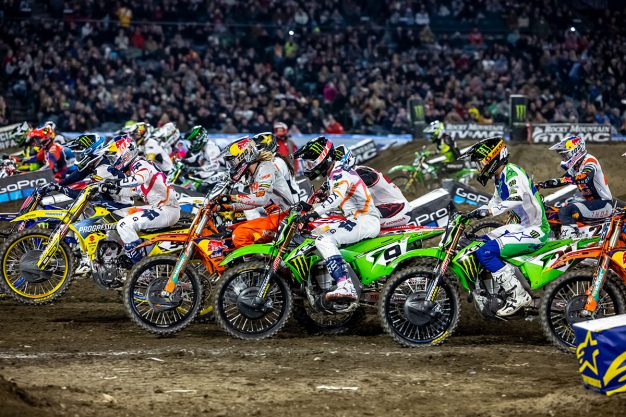 Q: Should the rest of the field be concerned that Eli Tomac has started so strongly?

A: Definitely. Teams won’t be reaching for the panic button just yet, as there’s still a long way to go in this 17-round championship, but Tomac’s victory was certainly cause for alarm. In 10 years of racing at this level, the Monster Energy Yamaha Star Racing racer has never started this well and he’s never won at A1, but it was how he won that was most impressive. He crashed on the eighth lap while leading, picked himself back up in fifth, then came through the pack to retake the lead from Team Honda HRC’s title hopeful Chase Sexton with three laps remaining. Tomac looked strong, extremely comfortable aboard the new 2023 YZ450F and incredibly quick around what was a super-technical track.

Q: Can Ken Roczen win races on the RM-Z?

A: Roczen might now have to kick-start his bike, but the Progressive Insurance Ecstar Suzuki rider appeared competitive all day, especially early in the main event. He delivered a trademark fast start that had him sitting in third for a few laps, before early leader Justin Barcia’s (TLD Red Bull GasGas) crash briefly elevated Roczen to second. He stayed out of trouble while many others fell victim to the track and finished a solid fifth position. If he can stay healthy this year, there’s a good chance he’ll win races, especially when the shorter Triple Crown events roll around.

Q: Who would be the most disappointed at this point?

A: With the 450SX class being as stacked as ever this year, there will inevitably be some factory riders who finish below their expectations. Anaheim 1 saw several, of course led by the likes of Malcolm Stewart (Rockstar Energy Husqvarna) and Barcia after going down while in podium contention. And then there were Marvin Musquin (Red Bull KTM) and Christian Craig (Rockstar Energy Husqvarna), to name a couple, putting in performances that were sub-par by their own high standards. Musquin (12th) and Craig (13th) – following a sizeable crash in the whoops during the afternoon – both found themselves caught in the chaos for most of the main and didn’t really fire any shots. And then there was Shane McElrath, a late arrival at Twisted Tea Suzuki and, unfortunately, a victim of a first-turn fall in the last chance qualifier. Most distraught of all? It would have to be Austin Forkner (Monster Energy Pro Circuit Kawasaki) after suffering another series of injuries in the 250SX main event.

Q: Who stood out as the biggest shock?

A: Team Honda HRC’s new recruit and 450SX rookie Colt Nichols put in an impressive performance on his way to sixth, especially when you consider it was his first Supercross main event gate-drop in more than 18 months (he crashed out of last year’s 250SX West opener after breaking both arms in his first heat race). Nichols was credited with the holeshot and led the first straight before getting pushed a little wide in the second turn, but remained solid and composed while everyone made mistakes around him. It was also inspiring to see Red Bull KTM’s two-time champion Cooper Webb looking more like his feisty self, as he charged from a top 10 start to finish second, but we will have to wait and see if the 2019 and 2021 title-winner is for real week in, week out. In the 250SX class, Muc-Off FXR ClubMX Yamaha’s Enzo Lopes was also impressive all day. After qualifying seventh, the Brazilian finished second in his heat, then pulled out a solid P6 result despite a bad start in the main to cap-off a productive day. 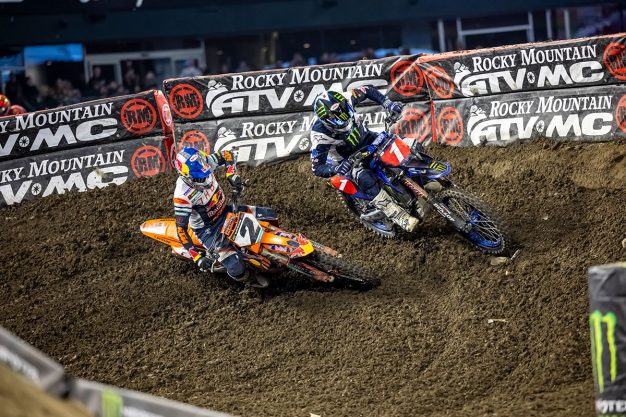 Q: Is there anyone whose results didn’t reflect their performance?

A: It was a case of what could have been for Stewart after a roller-coaster performance in the Anaheim 1 final. After capitalizing on Tomac’s early crash, the Rockstar Energy Husqvarna rider inherited the lead and looked like he was on his way to his first-ever win, but was muscled off the track by Sexton on the 13th lap. Stewart didn’t give up and continued to chase down Sexton and a surging Tomac, but hit neutral through a rhythm section and crashed heavily. The crash caused the transponder to come off Stewart’s bike, so he provisionally registered 22nd in the results, but timing was later adjusted to award him 16th as he continued to circulate on a seriously twisted-up Husqvarna.

Q: What’s the latest on Forkner?

A: The hard luck story of the opening round must go to Monster Energy Pro Circuit Kawasaki’s Forkner. After topping the 250SX qualifying sheets and finishing third in his heat, there were expectations that Forkner could start 2023 on a real high. Unfortunately, his campaign ended prior to the first turn in the main event when he went down hard on the start straight, resulting in him getting carted off the track. It was revealed three days later that he’s officially out for the rest of the Supercross championship with a torn ACL and other knee ligaments, a cracked tibia and a broken hand. It’s a heartbreaking season-ender for one of the fastest riders on the track and marks his fifth campaign affected by injury.

Q: Could Jett Lawrence have a perfect final 250SX season?

A: If the Team Honda HRC rider’s wire-to-wire performance from A1 is anything to go by, a perfect 250SX West season is somewhat in the realms of possibility for Lawrence. In saying that, there’s a lot of racing to go down between now and Salt Lake City and the likes of Cameron McAdoo (Monster Energy Pro Circuit Kawasaki) and RJ Hampshire (Rockstar Energy Husqvarna) were certainly on-pace at A1. It will only take one small slip-up or bad start from Lawrence to hand the advantage to these other championship contenders. Jett’s still the hot favorite to add the western regional title to last year’s 250SX East crown, but it’s too big of a call to project just yet that he’s on-track to win every main event.