All three come together in season-ending incident of Forkner. 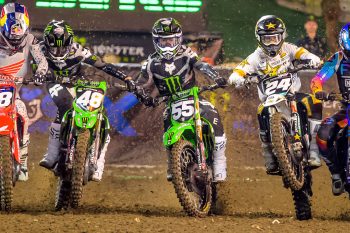 250SX West title challengers RJ Hampshire and Cameron McAdoo have recalled the three-rider contact that led to Austin Forkner crashing out of the 2023 Monster Energy Supercross season at Anaheim 1.

In the run to the first turn, Forkner crashed heavily after bunching with both Hampshire (Rockstar Energy Husqvarna) and teammate McAdoo, with a right knee injury sustained in the crash ruling him out of the series remainder.

Hampshire started to the left of Forkner as the pair touched shortly after gate-drop, which then veered the number 55 to the right and into his Monster Energy Pro Circuit Kawasaki teammate McAdoo, before ultimately falling while Hampshire and McAdoo were able to keep upright.

“I don’t think it was either of our faults,” Hampshire explained. “He kind of leaned on me a bit to the left and there was a big gap to the right, and Cameron just happened to be there, and it is a left-handed turn,” Hampshire recalled. “I mean, it is a bummer, I feel bad for him, yeah, but I don’t think you can kind of blame either of us for that.”

Hampshire went on to finish second, overcoming McAdoo in the closing stages to secure his strongest start to a 250SX season as the former completed the top three on the opening round podium.

“I saw a video of it afterwards,” reflected McAdoo. “I think I kind of had a wheel on it, I think I felt someone maybe hit me, maybe my back wheel or something,” McAdoo explained. “I didn’t know a whole lot, obviously came around the whoops the first lap and saw him down. That was all that I was really involved.”

With round two of the series at Oakland postponed until 18 February due to severe weather conditions affecting Northern California, the 2023 Monster Energy Supercross Championship will continue on 21 January at Snapdragon Stadium in San Diego.