Anaheim top five of Roczen ‘a solid start to the season’ 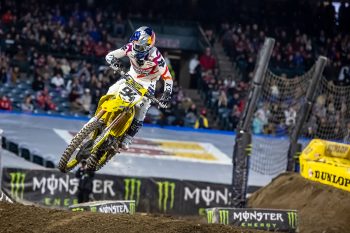 A top five at Anaheim 1 was ‘a solid start to the season’ for Suzuki returnee Ken Roczen, with the overall feeling positive for the H.E.P. Motorsports rider leaving the 2023 Monster Energy Supercross opener.

Marking his first race for Suzuki since winning the 450MX title for the brand in 2016, Roczen posted the fifth fastest time in qualifying at Angel stadium, later finishing a strong second in heat two. The number 94 ran as high as P2 in A1’s main event, before ultimately taking the chequered flag fifth.

“Our weekend in Anaheim was a fun one but a gnarly one,” said Roczen. “Quite possibly one of the gnarliest I’ve ridden. I’m stoked to get away with a top five at the opener. We’ve put in a lot of work and have some work ahead of us. It’s a solid start to the season. We didn’t blow anything out of the water, we didn’t do the absolute greatest either, and we have something to build on that I’m super stoked about.”

It was a challenging start to season for fellow RM-Z450 riders Shane McElrath and Kyle Chisholm, with the former crashing out in the first corner of the LCQ, while ‘Chiz’ was unable to start due to the ill effects of a stomach bug he was battling all week. The Twisted Tea Suzuki pair will look for redemption in round two at Oakland this weekend.