Strong sixth ‘something to build on’ after Nichols 450SX debut

Opening race intensity an area for improvement in upcoming rounds. 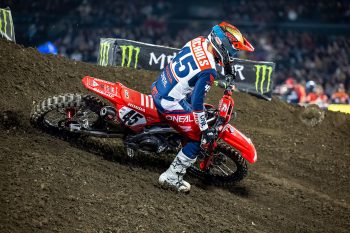 A strong sixth for Colt Nichols in his 450SX debut at Anaheim is ‘something to build on’ as the freshly-minted Team Honda HRC rider delivered a promising start to the 2023 Monster Energy Supercross Championship.

The former 250SX East champion landed a coveted spot with the outfit on a supercross-only deal for 2023, departing Monster Energy Yamaha Star Racing after multiple years spent on a 250, no longer eligible for the quarter-liter category.

After finishing seventh in his heat race, Nichols launched to the holeshot in A1’s main event before he was shuffled back through the first section. Maintaining composure, the number 45 moved forwards throughout the second half of the bout, ultimately banking 17 points to open his 2023 account.

“It was a little chaotic throughout the day, but things came around,” explained Nichols. “I started out making it through the heat race unscathed. I went into the main and got a really good start and kind of fumbled the first little straightaway and went from first to like sixth [laughs].

“I didn’t quite have the intensity the first maybe 10 minutes, and the front group got away a little bit–I was riding in no-man’s land. Overall though, I’m really happy. We got through it, which is all I really wanted to do, and I’ve got something to build on now. I’m excited for next weekend.”

Monster Energy Supercross continues this Saturday at Oakland, with round two of the 17-round championship taking place at Ringcentral Coliseum.