Major injury avoided by Stewart in A1 main event scare

Husqvarna rider 'healthy' after sizeable crash at opening round. 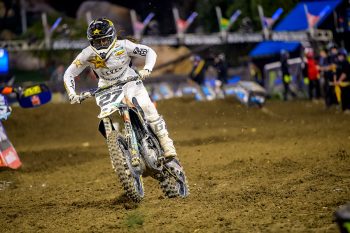 Rockstar Energy Husqvarna’s Malcolm Stewart has declared that he is fit to race-on after crashing out of podium contention in spectacular fashion during an Anaheim 1 thriller.

Leading throughout the season-opener, Stewart was on track to deliver one of his strongest 450SX performances to date, but fell hard in a rhythm section – possibly clicking a false neutral – with three laps to go while running P3.

Fortunately, the number 27 avoided major injury in the scare and is able to draw positives from how he progressed throughout the round, turning his attention to the second round of the series and his pursuit for an elusive premier class Supercross victory.

“The day started out pretty slow. I didn’t really ride that well in practice and the track was pretty tough, but I got to a point where I was like, ‘you know what? I just need to turn this day around’. I felt like I work too hard to get to this point,” Stewart said.

“I got a decent start in the main event and just did the best I could. I started riding, clicking off laps, making some good passes, and smart choices. I was leading the main for a while, which was amazing.

“I don’t think I’ve done that in my whole entire career. Just having all that pressure and dealing with it, if anything brings confidence to me because I know where I belong. I’m very proud of myself… Unfortunately, we did have a crash with three laps to go.

“It was a big crash, for sure. I’m glad that I’m healthy and walked away from it, so we live to fight another day and I’m more proud of myself because of how my day was going and me turning it around and going like that and doing what I’m supposed to do just brings more confidence for me. I’m looking forward to Oakland.”