As previously announced, the SuperMotocross World Championship Final will take place on Saturday, 14 October, in Los Angeles at the Los Angeles Memorial Coliseum.

“The design from the get-go was to make sure that each part of the country was represented so fans would have an opportunity to experience SuperMotocross first-hand,” said Dave Prater, vice president of Supercross, Feld Motor Sports. “It was important to have one playoff in the east, a second in the midwest and then the final on the west coast making each round easily accessible to each region.

“zMAX Dragway, Chicagoland Speedway and the Los Angeles Memorial Coliseum all provide the perfect footprint to create world-class SuperMotocross tracks and a one-of-a-kind fan experience that will blend elements from both Supercross and Pro Motocross.”

zMAX Dragway is situated adjacent to Charlotte Motor Speedway in Concord and is the world’s first four-lane dragway. Built in 2008, zMAX is considered the ‘Bellagio of Dragstrips’ for its expansive layout, large capacity grandstands and 40 luxury suites. zMAX is going to provide a layout where our track builders can create lanes suited for grandstand and suite viewing while also allowing fans to line the fence as they typically would at an outdoor event.

The Chicagoland Speedway 1.5-mile D-shaped tri-oval sits on over 900 acres of land, which will provide enough room for the track builders to get creative with the layout. Being a world-class facility, Chicagoland provides all the modern amenities motorsports fans expect when purchasing an event ticket.

The SuperMotocross World Championship playoff races and final will operate under a two-moto format for both the 450cc class and 250cc class. Each moto will be 20 minutes, plus one lap, in which olympic scoring will determine an overall finishing position for which SMX championship points will be awarded. 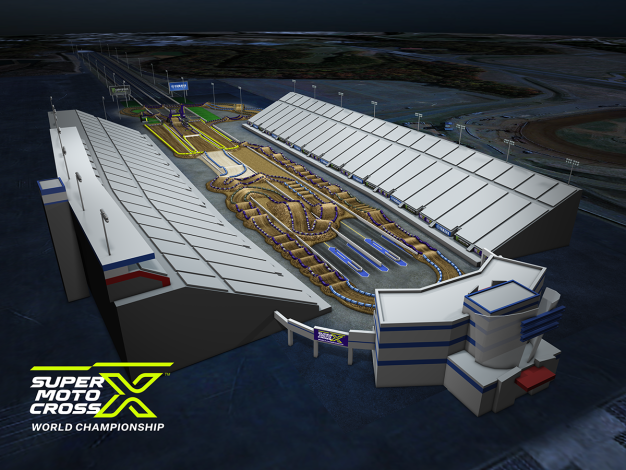