SMX title challenge not in Tomac plans at this point 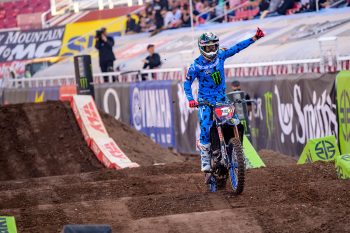 Current Monster Energy Supercross and Pro Motocross champion Eli Tomac has no plans to challenge for the new SuperMotocross World Championship (SMX) title at the end of the 2023 season.

Tomac, who recently celebrated his 30th birthday, has signed a Supercross-only extension with Monster Energy Yamaha Star Racing for the new year, but is unlikely to defend his 450MX crown.

While the now two-time 450SX champion will almost certainly qualify for the three-event SMX playoffs and finals, at this point Tomac isn’t intending on competing beyond the Supercross series. It’s yet to be determined if it will be his final campaign altogether.

“I wish I could say yes right now, but more than likely, it’s a no for now,” admitted Tomac when questioned by Leigh Diffey for Motorsports on NBC. “Winning never really gets old and I want to keep doing it for at least one more season of Supercross, so that’s where I’m at. When I originally signed this Monster Energy Yamaha contract, at the time it was a one-year deal and I did think that was gonna be it, but I had fun doing it, so I signed up another year…”

Tomac delivered a remarkable first year with Star Racing this season, winning both he 450SX and 450MX championships, as well as the Motocross of Nations (MXoN) at RedBud with Team USA.

At this point, Monster Energy Yamaha Star Racing’s premier class outdoor program with the new YZ450F will only feature former champion Dylan Ferrandis when Pro Motocross commences in May.