Incoming Team Honda HRC signing on his new deal and moving to 450SX.

After taking some time to secure his racing future, 2021 Monster Energy Supercross 250SX East champion Colt Nichols ultimately landed a coveted spot with Team Honda HRC for the upcoming season, signing a supercross-only contract to step up to the premier class in red. After an extended stint with Star Racing, MotoOnline speaks to the 28-year-old about his newfound opportunity, approach and the atmosphere in this Conversation as gate-drop for the 2023 450SX series edges closer. Big changes for 2023. Can you just touch on them from your perspective? You have got so much happening right now, stepping up to 450SX with Team Honda HRC.

It’s been certainly a lot of changes. We were in Florida last year with Star, then there wasn’t an opportunity there to move forward into the 450s, so we packed up and headed back to California. Really, we were just waiting, I had no idea what lay ahead. An opportunity presented itself with Honda, which was kind of a far-fetched idea at first, for sure I didn’t think this was going to be a possibility at all. To land here, has honestly been a blessing, and I sort of rode the bike around October 11th or 12th, rode outdoors for a few weeks then been on supercross ever since, and we are just trying to make progress, I’m trying to be better than I was the day before. That has been the attitude pretty much every single day and, luckily, I feel like we have been doing that. We’ve made a lot of progress on getting me more comfortable, and I’m really excited with how the bike is and how I am gelling with it so far, it is just a fun period. It’s a really, really good team, good atmosphere, I’ve got a really good mechanic in Jordy, just a really, really good group of guys. It was kind of a stressful off-season, but now that we have landed here, it has been nothing short of awesome.

You mentioned it was pretty stressful there for a bit, but does it feel like all of that was worth it now. So many people dream of riding that bike.

Yeah, I think so! When you look at it, injuries are never fun. I hated being hurt, it was a horrible experience all the way through, just like it always is. To end up in this situation, I would probably do it all over again, but it was just a lot of unknown. I had signed a deal originally to be in the 450 class to be in another team, that team folded and left us back at square one, so I was just like well, ‘what do we do now?’. Like I said, it was just a rollercoaster of emotions, we didn’t know what we were doing, then we knew what we were doing. Then that folded and we didn’t know what we were doing, and it was kind of just really, really up in the air. To end up here, we would definitely do it all over again.

You are in a completely different place now, obviously with the team and things like that. New bike, new competitors, you have a lot new which is great. Are you at all anxious about it or is it more exciting after being in your previous team for a number of years?

Yeah, definitely. I was at Star for – I want to say – six years. A lot of regularity there, with the staff, the bike. Nothing was ever really that new. I was on CycleTrader prior, so was on Yamahas for a long time. So the change now, going into this, it’s not necessarily the Yamaha to Honda, it’s the 250 to 450, it’s guys we are racing, it’s the conditions, it’s everything. Big, big changes and, yeah I would say it is a little bit of both. Anxious in the fact of it’s twice the competition, it’s twice the races, it’s a little longer, you’ve got to be a bit fitter. It’s exciting though, this is where I have always wanted to be. When you are growing up and watching your heroes, they didn’t just race the 125 class, there was the 250 class. For me to be in this spot is nice, it’s something I have wanted to do for a while, my career path just didn’t take me down this road earlier. For me it is all in good timing, I feel like I’m mature enough and able to see the big picture and handle everything that is coming at me right now with all of the newness. 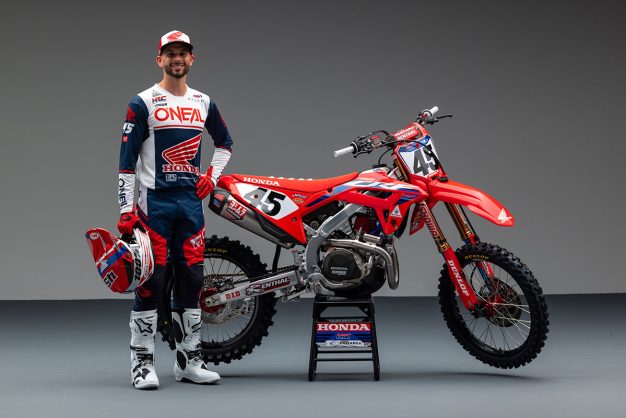 Talking the step from the 250 to the 450, switching classes. How has your adaption gone to the bigger capacity bike?

To be honest, I really feel like I suit riding a 450. The 250 you have kind of got to rev it a little bit and be a little on edge at times. Supercross you can still be pretty technique savvy and kind of finesse it a little bit, but outdoors that wasn’t the case. I really feel like it suits my style, I don’t really like to rev it, I like to be low RPM, which is what the 450 likes. I think that is a good, positive transition, but going from a Star 250 to a Honda 450 is a big jump, I haven’t raced these guys in a long time. I remember racing Eli [Tomac] and Jason [Anderson], a handful of these guys when I was 85 range, just maybe getting into big bikes. It’s been years, like I said my career path was 250, a little longer probably than even I wanted, but it was just the route that was kind of meant for me.

Looking ahead to the season opener at Anaheim. What is your plan of attack? Do you plan on sticking your toes in there and seeing how you do, how you size up against everybody or is it like, ‘it’s race day!’.

The approach for me even now leading up to it, is just a completely different feeling than what I had. Even 2022, coming in I thought it was win or bust and it was bust [laughs]. We didn’t even make it, so that was just a different feeling, coming in as a champion, going to the other coast, I felt like I had so much to prove, and it was just a day off, you had some anxiety of wanting to prove you are the best. For now, I know we are still four weeks out but I have a really relaxed and claiming demeanour about myself, and about the approach with the team, they’ve been very, very patient with everything. They are like ‘hey, we believe in your ability and we hired you for a reason, but come in, do what you feel like you can do, we will build, and try and progress as the season goes’. First and foremost, if I can get good starts and put myself in good positions, that’s the first thing and what I am really focussed on, and after that, we will just see how it plays out. I want to get in there and bang some bars, but, like I said, it is going to be a learning curve for sure and I am very aware of that.