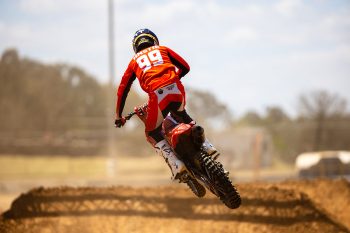 Anstie ultimately finished second in the SX2 World Championship, later dominating the Australian series with a 75 percent strike-rate to convincingly win the crown. That race time gained from competing abroad in the US off-season could be pivotal for Anstie when his assault on the quarter-liter category commences next year.

“Laps, laps, laps and gate drops have been great for me, and you can never underestimate guys on their home soil, “Anstie told MotoOnline. “I’ve raced the British championship before and I’ve had harder race wins there than what I did in the GPs at the time. It’s similar to this, the guys are fast, and you can’t underestimate them.

“They know how these tracks work, so it’s all great learning for me, getting to know the bike, getting to know the settings and trying to fine-tune everything, also getting race ready for this 250 class coming into next season. I’ve really enjoyed it and I really think that it has been beneficial for me.”

With Anstie’s current form in mind off the back of clinching in Australia at round four over the weekend, it is expected that he will contest 250SX West region of Monster Energy AMA Supercross, which begins on 7 January at Anaheim 1.