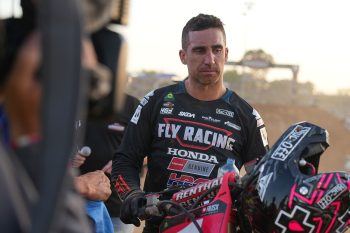 Fresh from sealing a record fifth-consecutive Australian Supercross Championship (AUSX), Honda Racing’s Justin Brayton remains undecided whether he will return to defend his SX1 title in 2023.

Brayton, 38, has been a regular in Yarrive Konsky’s factory line-up since 2016, winning the title on four occasions before the pandemic saw the series take a two-year hiatus.

Back this year in a bid to claim 450 title number five, Brayton won the opening round at Marvel Stadium and notched further podiums across Adelaide and Newcastle. He entered the final round with an eight-point advantage ahead of Matt Moss (BBR 102 Motorsports Yamaha).

Despite a flat tire in main event one, Brayton did what he needed to secure the title and landed fourth overall for the round with 4-4 finishes. Following his continued AUSX strike-rate this season, the question rises regarding the return of Brayton to challenge for title number six next year.

“For sure, the door’s always open,” Brayton told MotoOnline. “Especially when you have the number one plate, Honda and Yarrive [Konsky] would want me back…

“The hardest part is that I’ve got a family at home, my wife and three kids, and I wasn’t able to bring them this year because the older two are in school. Not that I’m being selfish, obviously, I am providing and such, but sooner or later enough is enough with the travel and all of that.

“I don’t know – I’ll have to decide. It has been a long year for me, doing AMA, World Supercross (WSX) and now this. For a retired guy, it’s a lot of work [laughs], so I don’t know. I will go back, enjoy Christmas and got some new things going on, doing a little bit of stuff with the American Supercross series, then we will see about WSX.

“No racing in America, but it will be fun to do potentially some broadcasting stuff, so I will be at six, seven, eight races. We will see, I’m not 100 percent sure. We will kind of just enjoy this one, but when the time comes, it is already hard not to come, every year.

“There’s been a couple of years where I left and said ‘alright, that was good, I got three and that’s plenty’, then I get four and then covid hits. At this point it was like, ‘I’m not going to go back’, then the time comes… I love it here, I do, I love everything about it. Too soon to know, but time will tell.”

Conditions at Wagga’s fourth and final stop of the season were topical come Saturday night, affected by an early evening time-slot in what was a day race at the beginning of the Australian summer. The heat as a result of that, combined with sunset, a track that was severely breaking down and associated dust made for a subdued end to the championship of sorts.

“That’s part of the challenge and why I think that sometimes this is the end,” Brayton added. “But I also understand from the promoter’s side of it that it is tough. I didn’t quite understand the timing of it with the sun literally right in your eyes for both main events, then the hottest part of the day they weren’t able to keep moisture in it – I didn’t understand that.

“Obviously there is a reason, I’m never too hard on them, but I will say I think that more consistency with track builders, maybe getting some riders involved with the prep of the track or just some consistency there.

“You get a lot of talented racers here in Australia and we want to see the best riders rise to the top and not get hurt because of certain conditions. Tonight was dangerous, absolutely, and this is a dangerous enough sport that there are things that we can do to try to minimise that.”

Regarding the racing future of Brayton, it was previously announced he would retire from full-time competition following the 2022 Monster Energy AMA Supercross Championship, however, it’s expected that he will contest at least one more season in the newly-introduced WSX series next year.