‘We’re looking to get things back on track’ – Webb 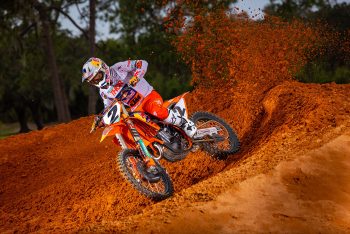 Following a difficult Monster Energy Supercross campaign this year, Red Bull KTM Factory Racing’s Cooper Webb is motivated to turn things around, back training at the Baker’s Factory in a bid for his third 450SX championship.

Webb entered this year’s Supercross season as the defending champion, notably moving away from Aldon Baker’s program at the beginning of the season, before returning in the latter stages of the year and taking extended time off through the summer.

Equipped with the revised KTM 450 SX-F Factory Edition this year, the two-time champion struggled to maintain the speed needed to contend for race wins on a consistent basis, also sidelined for St. Louis following a practice crash.

Unable to score a main event victory in 2022, Webb’s return to Baker’s Factory mid-season has him continuing that partnership through 2023 as he looks to return to the top step.

“I’m really looking forward to the upcoming season,” Webb explained. “It’ll be another great year with the Red Bull KTM Factory Racing team. We had a bit of a rough year last year, but we’re looking to get things back on track for this year.

“The crew’s been working hard and we’ve been doing a lot of testing. I’m back with Aldon Baker, so we’re back exactly like we were in 2021 and 2019. I’m looking forward to getting back on top this year, the goal is to go out and try to win a championship again.”

Webb missed Pro Motocross altogether this year in a bid to regain full fitness ahead of a 2023 450SX challenge. Entering his fifth season with KTM, Webb is currently on a supercross-only deal within the factory squad alongside Marvin Musquin and Aaron Plessinger in the premier class.