Make a difference with the latest 'Ready To Race' platform.

The 2023 KTM 450 SX-F Factory Edition has been unveiled, ‘Ready To Race’ and boasts a number of KTM PowerParts that enhance the latest generation of the platform.

The 2023 KTM 450 SX-F Factory Edition is a fully optimized and race-ready sculpture of the current KTM 450 SX-F that created a fresh standard in the industry for handling, power, engineering and competitiveness upon its presentation during 2022. The SOHC 4-stroke engine delivers a knockout 68 hp and weighs less than 60lb. 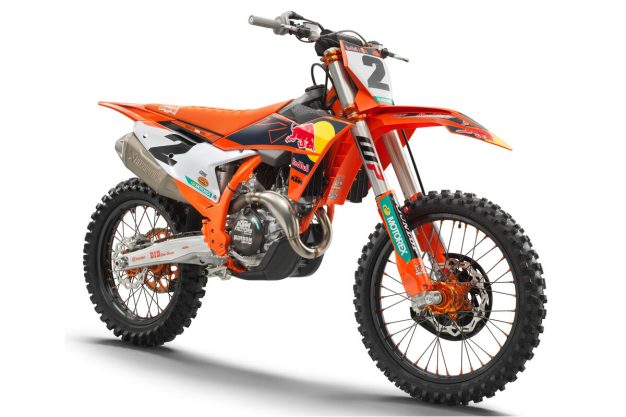 The motor oozes usable torque from every square centimeter and is harnessed through launch control, a quickshifter, two maps, a redesigned airbox, exhaust system and a series of other modifications befitting a motorcycle expected to fight for title success.

The altered ergonomics have improved the rider ‘triangle’ for tight centralization and enhanced feeling. The innovative ‘anti-squat’ concept of the frame and chassis (with reinforced aluminum subframe) compliments the revised engine position for increased centralization.

The whole bike is augmented with cutting-edge hardware from WP Suspension and the forks and rear shock can be adjusted easier than ever thanks to the tool-free configuration. The suspension benefits from refined settings, which have been mined from all the R&D work and data sourced from motorsports.

The new generation of KTM SX-Fs blasted out of gates and straight into contention during 2022. Cooper Webb and Marvin Musquin were both searching for AMA 450SX podiums and victories while the KTM 250 SX-F saw the quarter-liter incarnation immediately racking Grand Prix wins and ultimately the 2022 MX2 world title with Tom Vialle; who now takes the bike into AMA 250SX Supercross for ’23.

For the 2023 KTM 450 SX-F Factory Edition, KTM has applied a litany of KTM PowerParts to boost the function, the aesthetics and the exclusivity of the model. 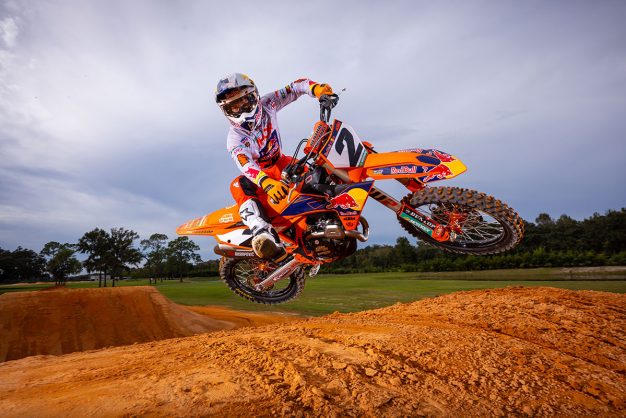 The bike is immediately distinctive due to the orange frame and Red Bull KTM Factory Racing graphics set. These details define the KTM 450 SX-F Factory Edition on any track or trail.