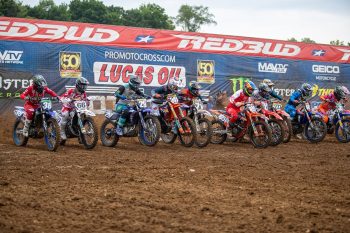 The MX Sports Pro Racing Scouting Moto Combine will return in 2023, continuing the development of some of the best up-and-coming amateur talents alongside two rounds of next year’s Pro Motocross Championship.

Entering its third season, the Scouting Moto Combine has facilitated more than 60 riders from A and B classes, including the likes of Haiden Deegan, Chance Hymas and Ryder Di Francesco.

The gatherings of the 2023 Scouting Moto Combine will take place on the eve of the RedBud and Ironman Nationals, on 30 June and 25 August respectively. Notably, next year’s initiative will feature one less round than what was featured in the Combine in 2022, however, as seen in previous seasons, the program will feature educational classroom-style sessions that will be intertwined with on-track practice, before competing in a pair of 25-minute plus two-lap motos.

Additional details of the 2023 MX Sports Pro Racing Scouting Moto Combine will be released in the coming months, including which amateur riders will represent their respective manufacturer next summer.