After signing with Fire Power Honda for 2023, part of Max Anstie’s new deal saw him compete in the two-round World Supercross Championship (WSX) ‘pilot season’ and now this year’s Australian Supercross Championship (AUSX) with Honda Racing. Boasting a wide range of experience, the 29-year-old currently leads the SX2 series in Australia and features in our latest Conversation. 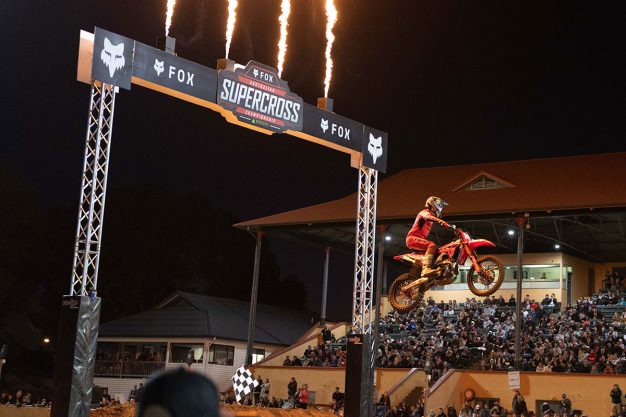 Congrats on your second Australian SX2 main event win in a row. This time out it was in Adelaide, how was it for you down there?

It was good, it was definitely a different experience. I didn’t really know what to expect, the track was not as technical as Melbourne and it broke down a lot, the turns were definitely looser, they were breaking down. It made it tricky in a way that there wasn’t really much to separate anyone, so I really had to focus on the turns and set my bike up for the turns. It took me the whole day really to figure my bike out because I was on the stiff side for usual supercross. It was more mellow with the jumps, but then obviously you could really attack the turns. I searched for settings all day and even after the heat race I went back and changed some stuff for the main. The main I felt the best I did all day and was solid. It was good, good progress for the team, it was nice to race in different conditions and on a different track and get the job done. My teammate [Wilson Todd] rode well as well, so it was good for us both to be on the podium for the team.

I guess probably that was your first real or true experience of what it’s like in the Australian Championship. Did JB [Justin Brayton], Yarrive [Konsky], or anybody like that kind of give you a heads-up that these aren’t all like Melbourne? Did you know what to expect coming in?

No, not really, I mean Justin told me that he has been to Adelaide before, and sometimes the whoops are huge and it is really technical and sometimes it is pretty easy. We got there this time and obviously, the track wasn’t too technical with the jumps or the whoops. It was good, I’m enjoying it, I’m enjoying figuring things out fast and trying to make the bike work everywhere and me as well. It definitely makes the racing a lot closer, because all of the guys can do the same obstacles, everyone can do the whoops pretty much the same speed so it’s all about the little things. I was just trying to make the best of each session and see if I could make up the difference on the easier parts of the track. We saw that when you returned to the US that you were pretty clear that the target was to become a supercross guy. To me when I look at you now, these last few weeks including Cardiff, I think it is safe to say Max Anstie is a supercross guy. It looks like you have really found comfort, you’ve got a lot of gate drops in, you are going to have more to come in the next month or so as well. I feel like this has kind of been a good trend, a good time for you in terms of what you have set out to do in the US next year too.

Yeah 100 percent, it’s been nice, and making the transition to the 250 with this team and having good people around me, having Martin Davalos as team manager and even good teammates, having JB, having [Ken] Roczen for those two rounds in the world racing, I have learnt a lot and lot a with the bike. I think it’s a progression, I had a couple of years of the 450, but it’s obviously… I’m still learning in a way. I’m going in there, I’m still going to learn and the 450 class is gnarly anyway. Now I’m on the 250, I’m going out there to win races and I feel like I’m in a position to do that. It’s been fun, it has definitely been a good off-season so far with the races we have had and I’m looking forward to the future, to next year and also the world supercross next year, I feel like it’s really going to take off and be a solid championship.

Finally, I guess it is interesting to see Yarrive has a team in Australia and he has got the US programme as well and you guys have all returned there, back to the US for training in between Adelaide and Newcastle.

For me, one it’s nice to come home because my family is here and I can get back to my normal routine, Australia is all new to me. Two, we’ve got the track, the gym, the facilities at MTF, we can’t replicate that in Australia, at the moment there isn’t really anywhere that is like that. For me, I’ve got some work to do with testing, I’ve got other bits and pieces to check off the list and keep stepping and progressing coming into the last two Australian rounds and following that on through December to Anaheim in January.