Breaking down select elements of the 2022 world championship.

The arrival of the SX Global-led World Supercross Championship (WSX) provided its share of both anticipation and challenges, with both rounds now complete and champions crowned in its 2022 ‘pilot’ season. In this latest Rated feature, MotoOnline takes a look at selected elements throughout the inception of the series this year. Topic: Race format/scheduling
Rating:  B+
Rundown: There’s no doubt that the short and sharp, back-to-back-to-back format used in the WSX finals provides excitement and intense moments, however, it can lead to confusion if the information isn’t conveyed correctly. Little rest in between each gate-drop meant it wasn’t clear where each rider stood points-wise entering each of the upcoming ‘motos’, so while this was improved in Melbourne, it could still be better. Slightly more time in between finals at Marvel Stadium was a plus, enabling all involved to effectively reset and to gain an improved view on where everybody was positioned following each race, however, we have to admit that a mix of extended mains are missed (sprint races and full-length mains, anyone?). On top of that, placing the entertainment prior to the SX2 finals in Australia was a good initiative because it placed a greater emphasis on the category’s main by pushing it further into the night show (intermission had been after the 250 finals in Wales). Aside from that, let’s keep Superpole around… it works! Just work with the split times more. Also in Melbourne, the addition of the Australian Supercross Championship (AUSX) on Friday was a bonus in terms of more action for the fans who attended both nights (there was also practice for WSX on night one), although with the AUSX series playing a support role of sorts, there could have been a better execution in the way the domestic series was integrated into the WSX program behind the scenes if we consider the commercial differences, team communication and general operations of what was an important return for the AUSX series.

Topic: Entertainment
Rating: B-
Rundown: You have to credit the effort that WSX series organizer SX Global put in to accommodate the broad audiences at both rounds with a live performance from AJ Tracey in Cardiff, followed Peking Duk (Friday) and Bliss n Eso (Saturday) taking to the stage at Marvel Stadium. With these events targeted at entertaining the whole family, there’s always going to be differing takes on the frequent dropping of ‘f-bombs’ by Bliss n Eso though… some, of course, saying it was fine – that’s who they are – and others of the opinion that the language used to build hype was inappropriate for the younger moto fans in the audience. Part of the music? Maybe. Just because? Probably not ideal. Aside from that, freestyle motocross is always a significant and relevant entertainment factor for casual fans. In all, the entertainment is welcomed, but let’s make sure that we maintain that pure, professional ‘motorsport’ feel of what is meant to be an FIM world championship as well. On a similar, but different note, we’re not sold that Ralph Sheheen and Jeff Emig are the right fit for WSX just yet, because as much as we like those guys – sure, they’re familiar, very good at what they do and have an immense history in the sport – there’s no avoiding the fact that they take us back to past years of AMA Supercross. That said, maybe it is simply a case of time and they will soon become ‘the voices of WSX’, rather than carrying that feel of being a throwback to the American series.

Topic: The competition
Rating: A-
Rundown: It cannot be questioned that a group of the most high-profile athletes in the sport lined up in WSX, such as Eli Tomac (Yamaha) as a wildcard at round one, along with new 450 champion Ken Roczen (Honda Genuine Fire Power Honda Racing), Joey Savatgy (Rick Ware Racing), Dean Wilson (Honda Genuine Fire Power Honda Racing), Justin Brayton (MotoConcepts Racing) and SX2 title-winner Shane McElrath (Rick Ware Racing) – to mention some – across both Wales and Australia, as did the legendary Chad Reed out of retirement before injury struck. However, the depth of competition didn’t rival that of Monster Energy AMA Supercross and we’re not sure if it will anytime soon. That said, would the series actually be better if SX Global didn’t have Roczen or Tomac in attendance, at least in terms of the unpredictability on-track (like in the 250 class, for example)? This series was always Roczen’s to lose and, in the end, it was the Honda Genuine team that largely benefited from having Roczen paid for by SX Global in this inaugural season. The fixed number of permanent riders complimented by wildcards at each round results in both positives and negatives, because while it ensures consistent rider numbers for each location with 22 per field, there will be significant pressure – and challenges – for franchise teams to find fill-in riders once this series commences in June or July from 2023… When the likes of American Pro Motocross, Australian ProMX and MXGP (along with other national outdoors) are already mid-season. And remember, there are said to be major fines for these teams if they don’t show up with two riders per class, so watch this space. 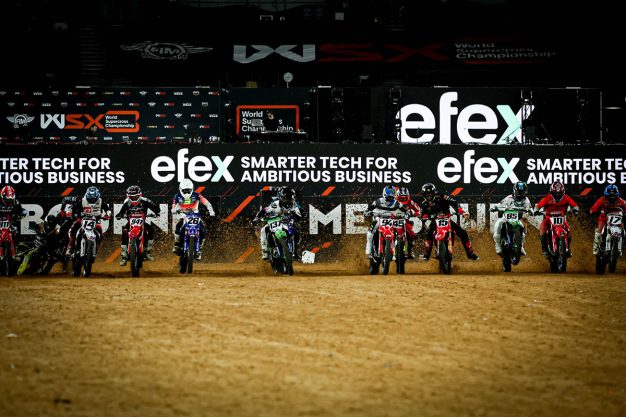 Topic: Track layouts
Rating:  B
Rundown: The track layouts we’ve seen so far in WSX have been somewhat generic with the exception of the unique ramp used for the finish jump, but Australia was better than the British Grand Prix, no doubt. They weren’t overly technical layouts for riders of this caliber and that could possibly make racing tighter, but that said, the slick soil in Cardiff was notable and Melbourne was definitely a whole lot better than the hard-pack nature of AUS-X Open at the same venue a few years back. The way the split section was used at Marvel worked relatively well and, of course, we can’t forget the quads that we saw become talking points at each round, so there were a bunch of positives to take out of year one and they should only improve from here. One aspect to consider and what we’ve all been wondering, what was causing all the flat tires – was it poor dirt (which seems strange across two countries) or should we be taking a closer look at if the ramp is a factor? Either way, it needs to be investigated and solved before round one next season.

Topic: Broadcast
Rating: C+
Rundown: This is an interesting one because of the need to take the sport global in this instance and, obviously, it’s critical to get right for the fans worldwide who want to follow the championship. Make it difficult – or unreliable – and chances are you will lose interest before it even begins. The method of broadcasting introduced for the 2022 season was more of a traditional one, aired on Fox Sports between FS1 and FS2 in the US (you couldn’t even watch round one live…) and also being on cable television in many other countries. In Australia – the home of SX Global – there was an exclusive deal struck with the Seven Network (both rounds only available live via streaming through the 7plus app, rather than actually being on any of Seven’s multiple free-to-air channels as it happened). It all sounds promising on paper and was likely done with the ultimate target of securing lucrative broadcast agreements in future, but in an age where trends are rapidly evolving, we’re not sure that this element was exactly nailed. Add in the fact that WSX.tv was launched as a ‘pay-per-view’ service for those countries that didn’t have alternate ways to watch (or featuring as a delayed extra in cases such as the US), there was a sense of uncertainty among those wanting to tune in. As well, it’s not like the WSX.tv ‘freemium’ content is of any substance so far, and an increasingly-important YouTube presence from an event standpoint has been second-rate. In our opinion, it’s a mistake to ‘sell’ all broadcast rights to the point that media (yes, including us), teams (series partners), riders (vlog central!) or otherwise aren’t even permitted to create on-track content, even though a select few did at both rounds, regardless, without policing. Truth be told, WSX isn’t Formula 1 or MotoGP – definitely not right now – and we are in 2022… WSX needs to welcome all the modern-type content that it can possibly get, not restrict it. And if that means negotiating better at the broadcast table, they will only win for it in the end if the series is to become the ‘new era’ of the sport that SX Global has claimed it will be. All that aside, the actual product of what Nathan Prendergast and his broadcast crew delivered was of a high standard (we ignored the on-board cameras), which was never in doubt with him at the helm.