American round of world championship already high on the agenda. 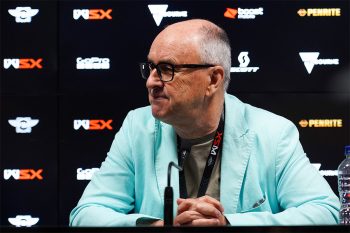 You could see a ‘migration’ across to the World Supercross Championship (WSX) ‘over the next three to four years’. That was the bold prediction of SX Global president Tony Cochrane in the lead-up to the Australian GP last weekend.

Flamboyant businessman Cochrane – who founded V8 Supercars in the ’90s and is also the chairman of the Gold Coast Suns AFL (Australian Football League) team – is all-in on WSX and is certain the series will take off on a global scale.

WSX dropped the gates on its two-stop pilot season in Cardiff earlier this month and concluded in Melbourne on Saturday evening at Marvel Stadium, where Ken Roczen (WSX) and Shane McElrath (SX2) were crowned the inaugural champions under SX Global management.

Prior to 2022, the FIM-sanctioned Supercross World Championship had been staged in conjunction with Monster Energy AMA Supercross in the US for much of the past two decades, with a mixed history in Europe before that term. Now, SX Global with lucrative funding from Mubadala Capital is attempting to establish WSX as a truly international platform.

“I think the opportunity to truly take it global and, one of the things that has even blown us away is since Cardiff or before Cardiff and now, is it’s really kind of proof of concept time for us, because we knew there was a global market out there for supercross, but nobody had been stupid enough or dumb enough previously to spend 50 million testing the theory, right?”

Since securing the rights late in December and developing the 10-team franchise system from the ground up, WSX has come under scrutiny for dropping its so-called ‘pilot’ season from a targeted five events to two in the end with relative success, but SX Global maintains that 2023 will see as many as 10 rounds when the schedule is uncovered in November.

“We are giving the theory what I call the ‘acid test’ and that is, we’re putting our money where our mouth is,” continued Cochrane. “Now, we could have done three rounds this year… We could have finished off in Indonesia, but we made a very, very correct decision mainly for the sake of our teams, who we really respect, that it was too big a risk.

“The venue, we didn’t believe back in September, was going to be ready and we got it right. It won’t be ready until January, so to be there in two weeks time would’ve been a disaster.

“You do need deep pockets and you do need great courage of your convictions to take these things on. We really believe in the product of World Supercross, we really do believe there is a global audience out there. These athletes are so talented and we really believe that the world wants to see that and we are prepared to put that to the test.

“And in my humble belief, in the next two to four years, you’re going to see this championship grow enormously. Next year’s going to be somewhere between eight and 10 rounds spread right across the globe. You know, we probably knock back more cities at the moment that have been on offer because we want to go to the right places.

“I think what we’ve done with Cardiff [and] in Melbourne, we’ve proven that we’re going to take this to quality venues. I don’t think anybody’s gone to Cardiff or gone here and said, ‘ugh, man, they’re doing this on the cheap’. I mean, we are really doing a world-class job of it because we want to present the sport as a true world-class sport.

“Even [MXGP] is a world championship in the sense that it does go to different countries and people do get the opportunity. Why should supercross riders be denied that opportunity? Nobody can sell me in on that.

“So, I think what you’ll see is a migration over the next three to four years to us and I think you’ll see that supercross truly can stand on its own as a world-class sport and the athletes get the recognition on a global scale that the athletes deserve.”

While the 10 organizations currently holding exclusive WSX team licenses are independent and major manufacturers appear reluctant to offer factory-level support from a participation standpoint, Cochrane is still confident that the tide will turn in the favor of SX Global in due time.

“I think that we play an important role in showcasing Honda, Kawasaki, KTM or whoever, and I think that in the fullness of time, all of those manufacturers will decide that, ‘hey, these are good guys, they’re actually our friends – we actually want to jump into bed with them’,” he said. “If they want to take three months to decide that or three years, it doesn’t bother me in the slightest because we’re on our course. We’ve set sail. We’re going.”

American Supercross and Pro Motocross are widely recognized as the pinnacle of the sport, featuring athletes from several parts of the world, and despite the fact that MXGP is yet to truly crack the US market following numerous attempts, SX Global is intending to take WSX to the Americas sooner, rather than later.

“On my map, the United States of America is still a country and we’re a world championship, so we have no fear about going to the US,” the ever-direct Cochrane explained, while acknowledging the strength of the AMA series. “As I’ve said before, there’s a very good championship there, no doubt about it.

“What might blow people away is we’ve got about nine cities in America wanting us… We’re weighing that up very carefully at the moment and we’ve got some very good partners in America. Not just America – North America, South America and Central America. Where others, perhaps, see fear, we see opportunity.”

Asia, the Middle East and Europe are all also understood to be on the immediate radar. In a stepped process, there could be as many as 13 rounds in 2024 and the intention is to increase the WSX championship to 16 events by the third or fourth year, with team sustainability within that projected growth also a critical factor.