Championship winners Roczen and McElrath recall second round in Australia.

In a dramatic final round of the 2022 World Supercross Championship (WSX), Honda Genuine Fire Power Honda Racing’s Ken Roczen delivered to secure the inaugural WSX title, as Shane McElrath (Rick Ware Racing) prevailed in SX2 to be crowned champion on Saturday in Melbourne. Both riders were available to the media after the races for this Debrief feature. 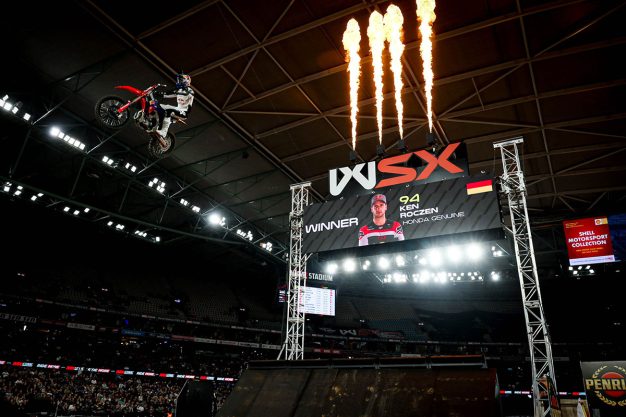 Kenny, congratulations on the WSX Championship. In that second race getting the flat tire, you look around and go straight to the pit area. What was running through your mind at that point?

I think what was the scariest was that I’ve thought I’ve had a flat before and didn’t have a flat, so I kind of felt it go, in my eyes, somewhere before the whoops. I hit the whoops and was like ‘oh god’, in my mind I was ready to crash. I feel like I could of saved it and I was waiting for something to happen. I came around, it started feeling weird but it probably wasn’t all of the way flat yet. I crossed the start straight, it felt weird, went over the wall and it started getting more and more. I looked down but yet I kind of kept going but in the dragon’s back and finish line I was like ‘yep, I definitely have a flat’. After that I was just rolling around, I didn’t get mad or anything because that is something that can happen, it was nobody’s fault. I didn’t have a nail or anything in there, so I must have hit a rock somewhere. I just stayed calm and I rode back, I saw the title hopes fizzling away but I just tried to stay clam and handed the bike off to my mechanic Jordy and just sat back, tried to take some deep breaths. Once Chad came over and told me there was about a four point difference, there was still a chance to get it, but I know Vince [Friese] is a good starter. I knew that I had a good start, I was actually really pumped on all three of my starts, and in the end, I did what I had to do to get it done.

The big story coming into this, you basically tear up what I am guessing would be a seven-figure contract with HRC to do these two races. Money-wise, that probably didn’t make sense, you’ve spoken about your reasons for doing it. You came here, you’ve now won the WSX Championship, number one plate for next year. Are we looking at a thing where you go to these guys and go, I need a million bucks, I need two million? Do you want to be the guy that takes SX back to Germany? Do you want to be the guy that rewrites this new chapter of Supercross?

All of that is possible, I’ll leave negotiations up to my agent [laughs]. I mean it all sounds really appealing, I think what makes this thing more exciting is once we get to eight rounds, 10 rounds, for a rider it makes the most sense. I think next year going to eight and more, that’s when this thing becomes even bigger and a very real thing. Everything is possible, I have no commitments as of right now, and nonetheless, I’ve said it before and I’ll say it again, I’m very stoked that I made the decision that I made. The experience alone that I have gotten by doing this is really hard to beat, and it has been a long time since I’ve had that feeling. I feel like it is exactly what I needed to kickstart the second part of my career, and I am very excited to see what the future holds for me.

Supercross in Germany for 2023, what do you think that would look like for you as a German athlete taking the sport to your home country?

It would be bonkers. I know that I’m German, but anywhere around Europe. We’ve talked about it before, it is difficult for people to come to the US. It’s a lot of money to spend, having it a lot more local will make a lot more sense. I think it would be a great experience of course.

You were part of Yarrive Konsky’s Honda Genuine Fire Power Honda Racing team in WSX, coming over obviously from Team Honda HRC. What was that experience like? In Australia, it is the factory team but for the most part internationally it’s independent. What was that like? What was the bike like? It looked like you adapted really well.

I really, absolutely loved it. Everybody wants to win, especially Yarrive, Martin, it was just a very nice environment that I felt super comfortable in. When I am comfortable and I’m having fun, that is when I am getting the best results and ride the best. That change was so good for me, and setting up the bike I really only had a couple of days, and with a bit more time we can make this bike a lot better. But for what it was, I was stoked to get it done in that short a period of time. Like I said, those guys really want to win, and I am so pumped to be able to deliver this title for them. Just to see their faces, I haven’t won a title in a long time right? I just like seeing them happy because I know they want it so bad and they have worked so hard. It was just a feeling that is really hard to describe, and I was really thankful that I was able to deliver it for them. Like I said, the bike worked really good. I struggled a lot more than I thought I was going to to adjust, I adjusted quicker to the two-stroke last weekend than I did coming here, believe it or not. Yesterday in the first practice I was like, I need to get out of here, this is not good. I felt like I fish out of water, but I was able to adapt more and more throughout these last couple of days. It was such a rad experience. 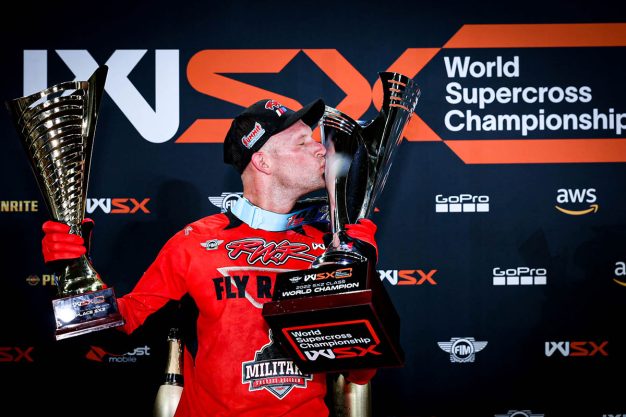 Shane, as we have talked about so many times, heck of a year. Where do you rank this in your career, and where do you go from here?

I mean honestly, it is a big accomplishment. We took this opportunity as one to rebuild and to grow, Rick Ware came to me and was like I want to win a world championship, and I want you to do it. I don’t know what that looks like, but you tell me. I’m like, well, this is the time we have, this is what we need and was like alright. So we went to work, and yes, the feeling of winning the first season of the World Supercross Championship, it’s big, for me it’s a year of rebuilding. Definitely got my confidence kicked in all year, just being bounced around and feeling like I got kicked around and stomped on. For me, I want to build back up and my 450 career hasn’t been anything to write home about, I’d really lacked confidence and help with setting the bike up. I’m still kind of a rookie on the 450, so for me getting my confidence back and tonight I felt like I rode with confidence. We had two days of riding after Cardiff, and it was two long days and we put in a lot of work to try to continue to get better. My starts were horrible in Cardiff, the bike was okay, that’s the first I’d got two days on it then we went straight to the race. We just kept going, kept growing and never settled. Tonight I had to earn it, these guys were going fast, the track wasn’t easy, Cardiff was a little bit easier just because it got so hard-packed and there weren’t multiple lines, everybody was going for the same thing. Tonight it was… we had some good ruts and they weren’t smooth at all. This is big for my confidence and just how I rode tonight, it was big for me.

Yeah, I mean the bottom line is we race as a job, and this series starting up has provided opportunities for many, many guys that had no other opportunity, myself included. When it came down to it, the choice was easy, it’s like well, we are going to World Supercross. At first, there was a lot of exclusivity, nobody knew a lot about it, myself included, and like Eli [Tomac] said on the podium in Cardiff, it’s real. I think myself and a lot of other people leaving Cardiff were like dude, this is real. It’s only up from here, and to me the first round that they did, I didn’t feel like there was anything really wrong. I think just as the group continues to grow, it is going to keep getting better and for me, like I said, this is a job and a great opportunity for myself and for my business. I love racing, I love winning, I love battling against these guys, the intensity and the adrenaline is really what keep us going. So to get to do this in the inaugural season, how can I turn back from that?

Did it ever go through your mind on the start line there for the last moto that you could potentially win a championship without winning a race. Did that set in a little bit more motivation to go out there and get it done?

Not really. I was kind of pumped that I got some room on my left side, I think it was [Jace] Owen, something happened with his bike. It was kind of like alright, we’ve got a little bit of room on the left now, and Max [Anstie], we were super tight on every start. For me, it’s like okay, I’m 2-2 on the night and I’m in a good spot, I knew I had some good points over in the second in the championship and I’m a racer. Yeah, there is a bigger goal in mind, but I line up to race and I’ve played it safe in the past, I don’t want to do that. Mentally, it was big for me to start out front and have Max, I think it was Max behind me the whole time. To have that pressure, I was like yelling at myself to stay focussed, the track wasn’t easy and it’s like keep pushing, that’s what was really tough, how bad the track broke down but still having to keep the same intensity throughout the whole race.