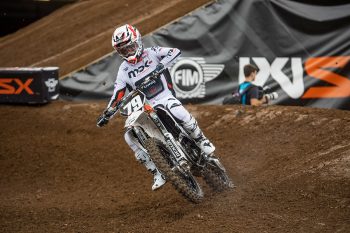 MDK Motorsports SX2 rider Derek Drake has turned his attention to next year after being ruled out of the 2022 World Supercross Championship (WSX) Australian GP weekend following a heavy practice crash on Friday in Melbourne.

Drake, 23, nose-dived exiting the dragon’s back before the finish ramp, causing him to spectacularly launch off the track and have a crushing landing during the first SX2 free practice session at Marvel Stadium.

A flat tire was identified as the cause of the incident and, as a result, the number 79 fractured the radius and a metacarpal in his wrist, bringing a premature end to his event and championship. Despite the misfortune he experienced throughout the pilot WSX season, he’s eyeing the opportunity to compete once more in the series in 2023.

“I’m pretty disappointed, I was having a really good time doing World Supercross and felt really good on the bike,” Drake told MotoOnline. “Such a bummer, it happened on the fourth lap of practice and just had a mistake. It happens and I’m really looking forward to hopefully getting another chance doing this whole WSX deal.

“It was fun while it lasted, I had a good time and I should be back on the bike in not too long. My plans for next year are to do some AMA Supercross, but you know, things are always moving around. My plan is now to get focused, get healthy and get back on the bike.”

Earlier this year, Drake competed in 250SX East with BarX Chaparral Suzuki, achieving a best result of P11 on three occasions. He completed the opening world SX2 round in Cardiff 20th overall after misfortune saw him notch 20-11-DNF finishes.