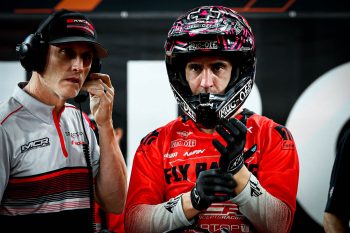 A furious Justin Brayton has moved to detail his view on the ‘unbelievable’ first turn move from teammate Vince Friese during Melbourne’s Super Final, taking him out of World Supercross Championship (WSX) and overall contention on the night.

Tensions soared post-race at Marvel Stadium both on the broadcast and, later, in the paddock as Brayton made his feelings on the situation clear. It’s understood that things almost became physical between the pair.

Ahead of the final encounter, the leading trio of MotoConcepts Racing duo Friese and Brayton, as well as Ken Roczen (Honda Genuine Fire Power Honda Racing), were separated by just four points in the standings.

However, Brayton’s prospects were almost immediately crushed at the exit of the first corner, with Friese carrying a wide line from the inside and effectively putting both MCR riders on the ground in the process – enabling Roczen to power away to the 2022 crown.

A spirited charge from Friese enabled him to recover to fifth position, while the deficit Brayton – who had to remount from the rear of the pack – faced was too great and he completed the final race of the season in eighth place. It also cost him a place on the series podium.

“Where do I even begin?” Brayton recalled post-race. “Obviously Kenny had a flat tire in the second one and I went 3-2 and beat Vince in both of them, so going into the last one I really just needed to beat Vince. He just decided – like he decides a lot of times – to just launch his bike at me in the first turn and clean us both out and jeopardize both of us for the title.

“We were 1-2 going into the last race and I’m getting fired up just talking about it, like you can do that so many times and he says he didn’t do anything. It’s unbelievable in my opinion. I don’t get fired up very often – it takes me a lot to get mad – but that one got me pretty mad.

“I can’t believe it, honestly. For one, we are teammates, yeah… I’m done with him, that’s just the way it is. All of us up here probably think the same thing that I am thinking – you can only cry wolf so many times.

“He’s done it to me a handful of times and I’ve forgiven him, obviously, we are teammates and we’ve hashed it out. I’ve been kind enough to fly across the country to help him and coach him, but that will never happen again, I promise you that.”

Brayton finished the event third overall and fourth in the final WSX championship standings, while Friese – who had played down the incident afterwards – was third in the title-race and P4 on the night. The MCR organization still managed to clinch the team’s title with Friese, Brayton, Mitchell Oldenburg and Cole Seely.