Direct updates from round two of the championship in Australia.

Follow the 2022 World Supercross Championship (WSX) with direct WSX and SX2 updates from round two of the season at Marvel Stadium through Racefeed. 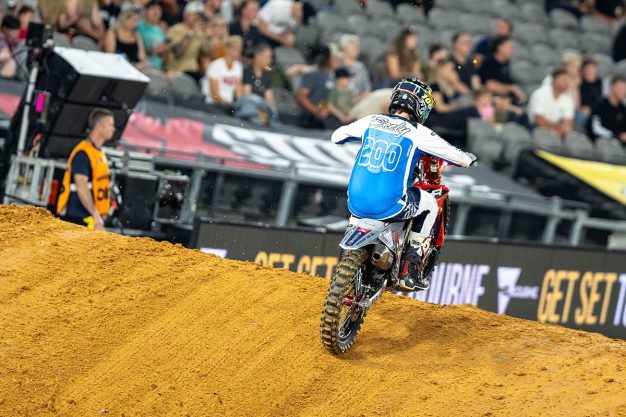 SX2 heat one:
Todd withstood the hard-charging Blose to take the opening heat race victory. The number 20 shot out of the gate to grab the holeshot and swiftly responded to a pass made by the Bud Racing rider to start his night show in the best possible way. Blose fell in the closing stages, dropping to fourth behind Kyle Chisholm (CDR Yamaha Monster Energy) and Moss. Phil Nicoletti  (Club MX FXR Yamaha) was fifth, as Brown, Seely, Henry Miller (Rick Ware Racing), Budd – who started strong – and Derek Kelly (Pipes Motorsport Group) completed the top 10.

WSX heat one:
It was a wire-to-wire victory for Roczen, stretching out his lead to claim a 4.620s win. Wilson rebounded from his heavy qualifying fall to finish second, pursued by Brayton in P3. Hill was a distant fourth, ahead of Tixier who narrowly beat Mellross for fifth. Grant Harlan (Club MX FXR Yamaha), Angelo Pellegrini (Honda Nils Racing), Webster and Alex Ray (Pipes Motorsport Group) rounded out the top 10.

WSX heat two:
Savatgy confirmed he means business in Melbourne, showing he is not afraid to get his elbows out on his way to victory. Friese squeezed his way into the early lead, but at half-race distance the number 17 forced his way through, bumping the MotoConcepts rider wide in the turn after the whoops. Savatgy ultimately crossed the line 2.0s ahead of Friese, with Soubeyras completing the top three, 5.026s from the front. Clason finished the bout fourth, leading Bourdon, Adrien Escoffier (Bud Racing), Thomas Ramette (GSM Yamaha), Ryan Breece (Rick Ware Racing), Freddie Noren (Pipes Motorsport Group) and Jackson Richardson (MDK Motorsports).

WSX super pole:
A thrilling super pole belonged to Roczen, who produced a smooth yet fast 46.080s to secure first gate pick for the finals at Marvel Stadium. Brayton delivered to land P2, four-tenths adrift of the number 94 as Friese completed the top three – just 0.103s shy of his teammate. Savatgy salvaged fourth, despite having a massive moment out of the turn before the whoops. A 47.319s was enough for Soubeyras to finish fifth, ahead of Clason, Hill, Tixier, Bourbon and Wilson who notably was on course for a top three time before he ran off the track at the dragon’s back.

SX2 final one:
Leading from start to finish, Anstie took a convincing win to open the finals in Melbourne. Championship leader McElrath played it smart and didn’t put a foot wrong to land second, withstanding Owen who finished a close P3. Title-contender Blose took the chequered flag fourth, ahead of Nicoletti and home-hero Todd. Oldenburg recovered from an off-track excursion on lap one after the triple to finish seventh, as Brown, Camporese and Desprey completed the top 10. Notably, fastest qualifier Bogle washed the front, bringing Tanti down – the pair finishing 11th and 12th respectively. Chisholm and Seely collided on the opening lap, both having to pit after the incident.

SX2 final two:
Tanti took a popular home victory in the second final, besting the ever-consistent McElrath who constantly applied the pressure. Anstie overcame Oldenburg for P3, with the number 48 taking the chequered flag fourth, Blose fifth. P6 was Moss, ahead of Brown, Crawford, Schwartz and Miller. Chisholm, Seely and Todd were involved in an opening corner crash, with the CDR rider remounting to finish P11, as Todd was 13th and Seely P18. Bogle also fell at the first turn but was unable to complete the outing and Owen was ruled out with a mechanical issue.

SX2 super final:
McElrath claimed the SX2 world title in style, taking his first race win of the season in the final bout to secure another overall, and the championship. Anstie kept the number 12 honest crossing the line less than a second from victory, following a last lap push. Tanti impressed once more to finish third, in front of Blose and Moss. Oldenburg had a heart-in-the-mouth moment on the opening lap as he approached the triple, recovering to P6 after losing considerable time. Positions seven to 10 were occupied by Todd, Desprey and Schwartz. Anstie and Tanti completed the podium for the round.

WSX final one:
A clinical performance from Roczen saw him start his Melbourne final assault on the best foot with a 4.842s win ahead of Savatgy. The Rick Ware Racing rider grabbed the early lead, but was passed by Roczen in the turn before the whoops in the opening lap and was unable to stick with the German. MotoConcepts Honda pair Brayton and Friese finished third and fourth respectively, ahead of Wilson in P5. Sixth to 10th were Tixier, Hill, Escoffier, Pellegrini and Bourdon.

WSX final two:
Savatgy kept his nose clean to win what was an eventful second final that saw disaster strike title-favourite Roczen. Roczen grabbed the early lead in the outing and looked set for another victory when he was forced to the pits with a flat tire. Brayton continued his podium run to cross the line P2, ahead of teammate Friese once more. P4 was Clason in a stronger showing, as Bourdon completed the top five. Former motocross world champion Tixier finished sixth, ahead of Webster, Harlan, Pellegrini and Soubeyras. Notably, Wilson and Hill were involved in a multi-bike pile-up with five laps remaining at the corner between the quads.

WSX super final:
Following the race two drama, Roczen did what he needed to claim the 2022 WSX Championship as Savatgy took another race win to take the round victory. With Brayton, Friese and Roczen entering a winner take all bout in the final race for the title, the stakes couldn’t have been higher. Savatgy moved to the early lead as Roczen worked his way to P2, while both Friese and Brayton were devastatingly involved in a multi-rider pile-up at the first turn on the opening lap. In the end, Roczen crossed the line 1.495s from the race win, as Hill completed the top three ahead of Wilson. Friese remounted and delivered a spirited charge back to fifth, as the top 10 for the final bout was rounded out by Clason, Soubeyras, Brayton, Tixier and Bourdon. For the round, Roczen and Brayton completed the overall podium.