Another replacement called up to conclude season in Melbourne. 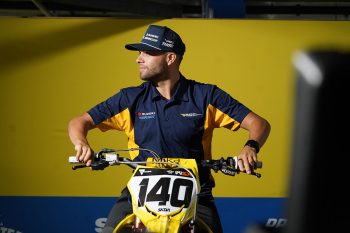 The Cardiff opener two weeks ago saw Starling called up to fill-in for Twisted Tea/HEP Suzuki regular Brandon Hartranft, but he injured his thumb and has been ruled out for Melbourne.

With Hartranft also only just returning to riding this week, Ray will make his first WSX appearance in practice tonight and then officially debut on Saturday night at Marvel Stadium. He’s excited at the prospect of joining the new series led by SX Global.

“I’m very excited, haven’t raced in a good bit of time but I’m excited to,” Ray explained to MotoOnline. “It was a bit of a last-minute deal, I’ve worked with Dustin [Pipes] before in 2019, I rode for his team in the states and had one of my best years ever.

“I’m familiar with the bike, obviously they have some different sponsors now, but honestly it’s a better platform. I was able to have a couple of days on a Suzuki before leaving, obviously not the race bike. I’m super confident, I’m excited to get back behind the gate and hopefully have some fun.”

This weekend will see Ray contest the premier WSX category alongside Freddie Noren on RM-Z450 machinery, while PMG team’s SX2 program will once again feature Dilan Schwartz alongside Derek Kelley, who in turn was a late replacement for Marshal Weltin in Cardiff.