‘I would do this decision over and over’ – Roczen on WSX

Also shares thoughts on unique race format ahead of 2022 finals. 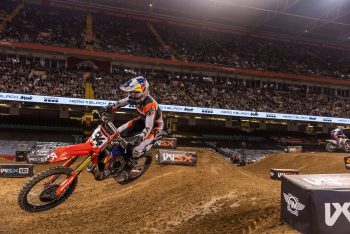 Contesting the World Supercross Championship (WSX) is a decision Honda Genuine Fire Power Honda Racing’s Ken Roczen would do ‘over and over’, reaffirming that he’s excited at the series prospects and racing again on a global scale.

Roczen maintained his commitment to the SX Global-led championship despite his presence in WSX effectively costing him a factory ride with America Honda next season in AMA Supercross.

“I would do this decision over and over – I’m glad that I did,” Roczen said in Australia this morning. “For me, the fun part is what I was craving, so it’s cool the feedback we have gotten and the potential in the future to continue this and go on to other countries and all of that.

“Obviously my focus is still next year’s Supercross series in the US, but I just feel like the limit people wanted to put on me and not racing this is what I disagreed with. I like to set out for myself and kind of throw a curveball at things.

“Like we’ve heard before, supercross and motocross is very domesticated in the US, with so much room to grow. I think that… I raced in Brazil in the past for GPs and those fans go absolutely bonkers and we haven’t raced over there in a long time.

“Those kind of countries I think are starved a little bit too, so I think if we can get there it will be so much fun for us too.”

Not only does the WSX championship boast the potential for riders and fans to experience SX on a global scale, but it also features an intense, three-race final format with short races back-to-back.

Such structure has never been consistently implemented in another major series and provides a unique challenge, especially on layouts such as that used in Cardiff.

“From my side, there was a little bit of frustration going on with how the race line played out in Cardiff, with all of the insides we took after the finish line,” Roczen added.

“I’m hoping that will be a little different here and I also think that the racing line might get set up a little better having a longer start straight – more of a chance for other gate picks, it is just the start was extremely short and with how slippery it was, it was just really tough that way.

“A little bit more time in between [the finals] probably doesn’t hurt either, because it’s physically no joke. I think we ended up doing 26 or 28 laps and, the last one, it gets tough. That’s fun as well for us to figure out and we’ve done these 20-lap mains for so long, this is a nice change of pace.”

Roczen enters the second and final round 2022 WSX second in the standings, but with Cardiff overall winner Eli Tomac (Yamaha) not competing at Marvel Stadium, the number 94 sits in the box seat ahead of tomorrow night’s finals.