Brayton and Honda Racing reunite ahead of AUSX championship 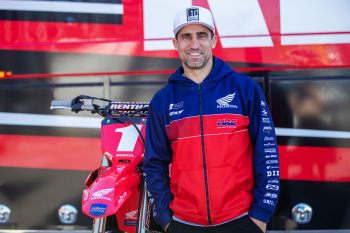 Defending Australian SX1 champion Justin Brayton has reunited with ‘Honda Genuine Polyflor Honda Racing’ in search of a fifth-straight championship, the team has finally confirmed just days out from the 2022 season.

Brayton, 38, won four premier class titles with the Yarrive Konsky-owned team between 2016-2019 and also spent a single season in Monster Energy AMA Supercross together in 2021.

It was a podium at Houston 2 that marked the high point of the season for Brayton in what was the team’s lone 450SX campaign, before focusing on 250SX East for this year. Konsky will take the team back to the premier class full-time in 2023 with the signing of Dean Wilson.

Despite Brayton switching back to MotoConcepts Racing (MCR) in the US and also in the World Supercross Championship (WSX), an agreement has been struck for the pair to rejoin forces in Australia, which will see Brayton line-up for both teams within the separate series in Melbourne this weekend.

“I cannot wait to see the Australian fans in the stadium and try to chase after my fifth title in a row,” Brayton commented. “I definitely have some unfinished business with the Honda Genuine Polyflor Honda Racing team. We will be leaving no stone unturned as we start another season together.”

Alongside Brayton in SX1 will be Wilson and Kyle Webster, while the SX2 team will feature international Max Anstie, in addition to American Gage Linville and national champion Wilson Todd.