Richardson and Wightman to step in for injured Reed and Grant. 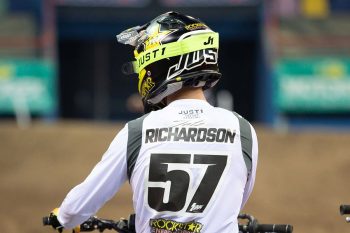 A pair of notable Australian fill-in riders, Jackson Richardson and Joel Wightman, have been confirmed for this weekend’s 2022 World Supercross Championship (WSX) round in Melbourne as part of the MDK Motorsports organization.

MDK team duo Chad Reed and Josh Grant both crashed out of the Cardiff opener, with the number 22 undergoing surgery following a broken hand, broken ribs and a dislocated shoulder in the incident.

Two-time Australian SX2 champion Richardson – also a former AMA regular – had already made plans to return to racing this year with Empire Kawasaki in the Australian Supercross Championship (AUSX) on a KX450, having competed little since piloting a privateer Honda to 13th in the 2019 SX1 standings. The MDK Motorsports opportunity will see him remain on-board his Kawasaki.

“First and foremost, I’m excited at the opportunity to race the WSX on Saturday,” Richardson said to MotoOnline. “It has just come up recently, the whole thing with Reedy [Chad Reed] and [Josh] Grant was unfortunate and meant two spots opened.

“I was lucky enough to get the call and fill-in. Racing both nights will have its advantages, more or less for just the soil, because it was really hard pack last time, so we will have an idea on how it is going to shape up.

“The biggest thing was, with this deal, because MDK is not tied to any particular brand I’m allowed to the race the Kawasaki that I am on with Empire from the Friday night. It’s not too big of an adjustment for me, which is really good. If I was going to a different bike then that would just be a different kettle of fish.”

The opportunity comes as a breakthrough of sorts for Wightman, who finished eighth in the Penrite ProMX Championship this year as a privateer Yamaha entry in MX1. He claimed seventh in the 2019 national SX1 standings with a best result of P6 in Adelaide and he took a top 10 at the Melbourne round.

It is understood that an attempt was made to attract Australian factory team riders including Hayden Mellross (GasGas Racing Team) and Dylan Wills (Husqvarna Racing Team) to fill-in for the round at MDK, however, the decision was made for that pair to focus on AUSX. KTM Racing Team riders Brett Metcalfe (WSX) and Nathan Crawford (SX2) will both be on double-duties as WSX wildcards in addition to their domestic campaign.

Competition commences this Friday at Marvel Stadium with round one of the 2022 Fox Australian Supercross Championship including WSX practice and qualifying, before gates drop for this year’s second and final round of the world championship on Saturday night.