Podium reward for Friese alongside Tomac and Roczen 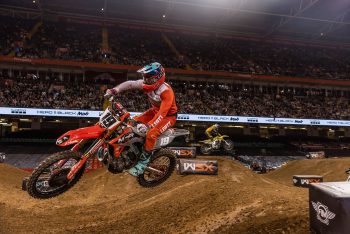 A podium finish alongside Eli Tomac and Ken Roczen was a valuable reward for the fast-starting Vince Friese who delivered when it counted to land P3 in Wales.

Having competed with the MotoConcepts Honda team in this year’s Monster Energy Supercross 250SX West and East coast 450SX races, Friese returned to a CRF450R with the squad for WSX.

Despite showing solid pace throughout the event, Friese really found his stride at Principality Stadium when gates dropped for racing and charged to P2 in his heat race, able to capitalise on a mistake from Tomac.

He continued that form into the opening final with another second-place finish, before leading the opening half of final two and ultimately crossing the line P3. Fifth in the superfinal was enough for Friese to notch a podium finish overall at the British GP courtesy of 2-3-5 scores.

“I had pretty good starts and sprinted really hard in the first two mains and that third one I kind of just managed the podium,” explained Friese. “I knew these guys were pretty quick all night and I didn’t really want to put up too much of a fight for that, I just secured the podium spot, as I had my eye on my teammate and a couple of the guys who were close on points with me but I got it done and I couldn’t be happier.

“It’s really cool to be in contention for the title but it’s just cool to even be on the podium with these two guys. It’s awesome for me and I’m trying to inch my way closer to their level. I’ve got a little bit to go but I’ve made some improvement.”

Friese enters the final round of the 2022 WSX Championship in Australia on 21-22 October 13 points behind leader Eli Tomac, however, at this stage, Tomac is not set to compete at Marvel Stadium as he was only a wildcard entry in Cardiff.