WSX format similar to what was used at AUS-X Open. 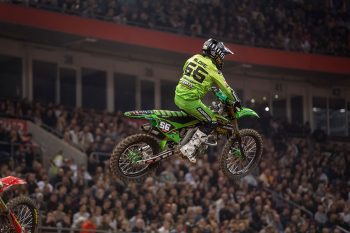 Past experience with the format of the finals used at the opening round of the 2022 World Supercross Championship (WSX) in Cardiff helped boost Chris Blose to the SX2 podium at Principality Stadium.

Bringing that experience to Principality Stadium, the Bud Racing rider saw similarities in the style and intensity of the racing and managed to secure second overall thanks to 2-4-8 finishes, with riders around him notably achieving a real mixture of results.

“I raced this format in 2019 at the Aus X Open so I was a little familiar with it but it was very similar and very chaotic, and you’ve got to be on it in the main events,” Blose explained.

“I think everyone up here had one bad race and it’s just trying to eliminate those, recover in between the main events. But you know what, being here has been an awesome opportunity and I’m very thankful, and I’m looking forward to the future of the World Supercross Championship, and the many more rounds that are going to come.”

Blose enters the second and final round of the 2022 WSX Championship at Marvel Stadium, Melbourne, Australia just one point from Shane McElrath (Rick Ware Racing) at the top of the standings. Following its 2022 pilot season, WSX is expected to expand up to 12 rounds between June and November for 2023.