Overall winners Tomac and McElrath recall first round in Wales.

The opening round of the 2022 World Supercross Championship (WSX) was packed with action on-track and when the final checkered flags flew, it was Eli Tomac (Monster Energy Yamaha Star Racing) and Shane McElrath (Rick Ware Racing Yamaha) in SX2 who claimed their respective overalls. Both riders were available to the media after the races for this Debrief feature.

The incredible year that is 2022, for you, continues… Three GP races, three wins. Can you believe it unfolded that way?

Well, to be honest, I started off a little bit slow. I was waking up and Ken [Roczen] rode really good in that heat race and super pole. I just never manned up for the quad, to be straight up… And that thing was big! I’m like, ‘nope, I’m just staying with the triple single for now’. And it ended up working out. All three moto were a little bit different, obviously got the gift from Ken in moto one and then moto two had to make a couple passes, but I think the most technical thing of the night was that dirt. It was tough and it was very hard pack. I almost fell actually in moto three also near the mechanics in that last left hander. But overall, just enjoyed the whole schedule in the racing. Coming in here, I thought the 8-8-12 format was maybe going to be a little short, but that wasn’t easy, and it obviously showcased some good racing, so had a lot of fun doing it.

Let’s talk a little bit about your overall experience with World Supercross competition. You said earlier in the weekend when you were talking about whether or not you’d come back and do the 2023 season that you wanted to see how the whole thing went, how it unfolded. What was your experience like here in Cardiff?

Well, it was real. There was… it was just a real supercross. Nothing was second level with it, it was all first class and it was great to see the big crowd here. That was really cool to see that stadium filled up. So to be honest, I was looking at the stadium like this is a big stadium, but I think we filled it pretty well.

There was a lot of riding this weekend from the two practices yesterday, two practices today, so everybody got a lot of time to figure out what to do and I would think the one thing that I saw you got really comfortable on was the ramp, because by the end of the night you were throwing some style into it after yesterday, really being the first time for you. How is it just to go through this process of that much riding this weekend when we don’t do that that often?

It was different. And to be straight up, I did too many sprint laps yesterday. I woke up this morning, I’m like, ‘gosh, I’m kind of sore… What the heck?’. Thirty minutes is a lot of track time, but it allows us to learn the track and not feel so rushed and panicked. So in that aspect, it’s really nice for race day, I feel like everyone’s more comfortable. Maybe there’s a little bit less chaos early on, so next time maybe I won’t do a bazillion sprint laps on Friday, but overall, I think it’s pretty cool to get that early day in or the day before the race.

What was the format like in comparison to the traditional ones? Was it more or less difficult than you expected?

It’s just, moto three, it’s tough. I mean, either way, the 20-plus ones are obviously hard too, but it’s just in a different way. It’s like when you get back to the line, you’re trying to bring your heart rate down and be ready and get your next set of goggles on and yeah, moto three’s tough. 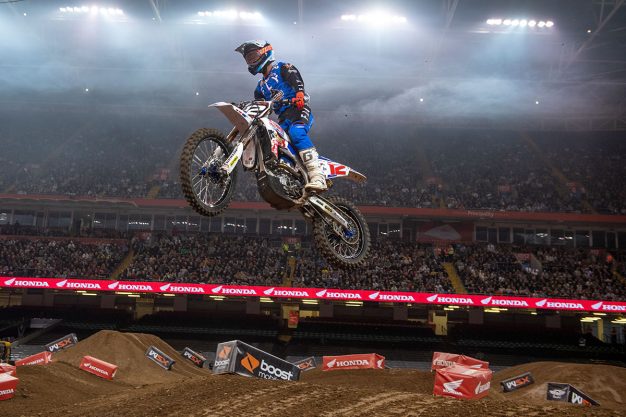 Shane, how about it… You win the first-ever SX2 race in World Supercross history. How’s that sound?

Honestly, it’s got a pretty good ring to it. This was a lot of work to get everything ready to go and minimal prep time really, for a lot of guys, so coming here it was like, ‘okay, we’re all kind of starting from the same level’, and the track was really good. I felt good on the bike and we were really learning every time out there, so here for the first-ever World Supercross [under SX Global] event, it’s been a blast. There’s some really good competition here and really good racing between our class and the World Supercross class, so I’m very excited for the future of this and it’s big.

It’s been a tumultuous year for you, we all know – start, stop, start, stop… how many different teams you’ve ridden for – then to come out tonight and do what you did. How does that feel after everything that you faced in the last nine months?

Honestly, it’s a big relief from the first time I was on the track yesterday, I was like, ‘okay, I’m going to be okay’. I rode my race bike two days before it went in the crate and I got to ride the practice bike two days, so coming here, there was a big question mark for me. It was about rebuilding. My last couple years have not been very well and this is my fourth bike I’ve raced this year. I really wanted to rebuild and Rick gave me a really good opportunity, and we kind of had some options and it’s like, ‘okay, well let’s try to get our feet under ourselves and rebuild’, really. So for me, I couldn’t believe that I won with my scores, but these guys said they all had one bad moto also, so it was a tough night of racing and I had three bad starts. I didn’t even really think about where I was. It was just, ‘I need to make moves’. So, for me it’s a good encouragement to just go back and it’s like, ‘okay, I don’t really have to beat my head against the wall’. It’s like I’ve been trying to just get some sort of confidence all year and I feel like I haven’t really had the time to do that, so it’s definitely rewarding to be up here, just healthy and I felt like I raced hard for the time that I had and I’ve got some room to grow, so I’m excited about it.

WSX is totally new for everybody, but what was your impression as a rider tonight?

It was really good, the pit set-up, how it’s set up for us and how our team was there. We had the rider lounge, we had the catering place. I felt like, well, we’re still learning a lot because we’ve never had any of this and even with the track, it was weird because in the race we weren’t taking any of the lines we were and qualifying. And, you were a brave man if you were setting up wide for the corners. So it was a lot of fun racing because you really had to be smart about it because the guy behind you is not very far back. With the corners being some of them so wide, it’s like you can leave the door open and normally there’s no move there, but those guys aren’t afraid to try something. So it’s honestly just great experience moving forward to Australia. It’s really exciting now kind of knowing how yesterday and today is going to go and just the timeframes and I’ll definitely be a lot better prepared. But yeah, I had a blast. I feel like it’s really, really kind of setting a good standard and it’s super well put together, I felt like.