Podium charge the target for round two in Australia. 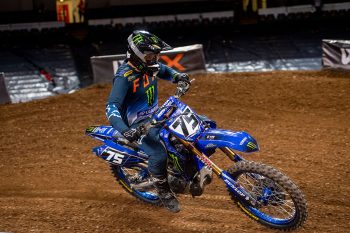 A consistent run in Cardiff helped CDR Yamaha Monster Energy’s Josh Hill secure fifth overall in what was a ‘wild’ opening round of the 2022 World Supercross Championship (WSX).

Having previously raced with the outfit in the Australian Supercross Championship, Hill reunited with CDR Yamaha Monster Energy for WSX and qualified 10th.

P4 in his heat race was enough for Hill to land a spot in superpole where he posted a 47.024s lap for seventh gate pick in the finals. While riders around him had varying scores across the three-race format, Hill remained relatively consistent with 5-7-7 scores to leave the British GP inside the top five.

“It was a wild race!” Hill recalled. “This format is super-quick and you don’t really have much time to recover. Although I didn’t have great starts, I managed to put myself in good positions over the first couple of laps, slowly picked guys off and didn’t make any big mistakes.

“To end up fifth overall was a good way to start the season being back with CDR Yamaha, my consistency paid off and it seemed like my speed was pretty good. I’m hoping at the next round in Melbourne I will be able to showcase a little bit more – the last time I raced there I was on the podium, so that’s the goal now.”

Hill will get the opportunity to charge towards the podium when WSX resumes in just over a week at Marvel Stadium, Melbourne, for the second and final round in its ‘pilot’ season.