A total of 27 contenders named ahead of anticipated event this Saturday. 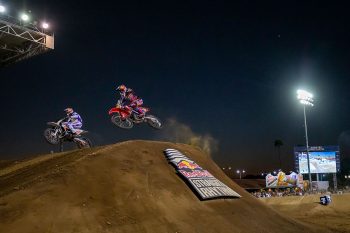 The complete Red Bull Straight Rhythm rider list is now confirmed, with a total of 27 riders to contest the unique event alongside the Moto Beach Classic in Huntington Beach this Saturday.

As previously announced, reigning two-stroke king Ken Roczen will compete in the 250cc class, expected to be riding a Pro Circuit-prepared YZ250 for the race.

Former 125/150cc category winner Carson Brown is back in a bid to claim victory once more and, like Roczen, is fresh off a trip to Wales for the opening round of the World Supercross Championship (WSX).

The format remains similar to previous years with a best-of-three race structure used and all riders competing in qualifying rounds before the fastest 16 riders from the 250cc and top eight from the 125/150cc class advance to the main event.

For those unable to attend the event, ESPN will exclusively stream the Red Bull Straight Rhythm live on 15 October, with coverage commencing at 2:30pm PST. Gates open at 10:00am for spectators to view the practice and qualifying rounds, with tickets available at www.eventbrite.com.