Season to span 20 rounds in addition to later MXoN in France. 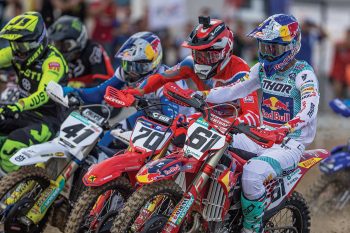 The provisional 2023 MXGP World Championship schedule has been released by Infront Moto Racing, spanning 20 rounds with multiple locations still to be announced.

While the grand prix season will be held between March through mid-October, the Motocross of Nations (MXoN) will take place at the later date of 22 October at Ernee, France.

Argentina will open the MXGP championship on 12 March, followed by two events in locations to be confirmed. Trentino, Portugal and Spain are next in line, before, France, Latvia and Germany, which will round out the first half of the season in Europe before the trip to Asia for the Indonesian double header in Sumbawa and a new location of Lombok.

Czech Republic, Flanders (Belgium), Finland and Sweden will see the action return to Europe, before we see a return to the Netherlands at Arnhem. From there, Turkiye will once again host MXGP in Afyonkarahisar, before the series will debut in Thanh Hoa, Vietnam.

A TBA event will follow in early October, before the championship is set to conclude at the MXGP of Great Britain at Matterley Basin for the 2023 world championship finale – one week prior to next year’s MXoN event.