Assorted racer comments following the first round of the season.

In Quotebook, a selection of riders detail how their races played out in the first round of the 2022 World Supercross Championship (WSX) at Principality Stadium. 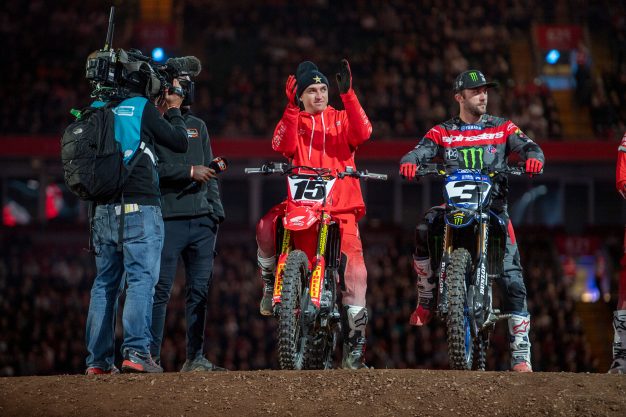 Eli Tomac (Yamaha) – First:
To be honest I started off a little bit slow and Ken [Roczen] rode really well in that heat race and in the superpole I just never manned up for the quad, to be straight up. That thing was a big nope I was going to stay with the triple-single and it ended up working out. All three mains were a little bit different; obviously I got the gift from Ken in the first and then had to make a couple of passes in the second but I think the most technical part of the night was the dirt: it was tough, very hard pack. I actually almost fell in the third, near the mechanics in that last left-hander. But overall I just enjoyed the whole schedule and the racing. Coming in here I thought that the eight and 12-lap races were going to be a little short but that wasn’t easy and it obviously showcased some good racing and I had a lot of fun doing it. The World Supercross Championship is real: it was a real supercross and nothing was second level with it, it was all first class and it was great to see the big crowd here. It was really cool to see the stadium filled up. To be honest I was looking at it thinking this is a big stadium but I think we filled it pretty well.

Ken Roczen (Honda Genuine Honda Racing) – Second:
In my superpole lap I wasn’t quite as clean as I wanted to be in the beginning, but the quad was huge and I wasn’t really planning on it but I saw Josh [Hill] do it. What made it really nice though was that it set me up real nice for the turn because I didn’t have to do that single into it with how slippery it was. In that first main event, obviously things happened really quick but from what I could tell there was a tiny line or ledge and the angle I was coming in on, I just wasn’t set up for it. It was so minimal but it just happened so fast. I tried to save it but I couldn’t. It was a bit of a bummer because it felt like it was set up to be a really good race. But it was tough out there and you couldn’t really rely on anything out on track because the berms were really flat. But it made for some great racing tonight.

Dean Wilson (Honda Genuine Honda Racing) – 17th:
I’m pleased to walk out of here in one piece. It was a rough weekend! There were some positives to take and I am excited about how I feel on my CRF450R, but I just need some more time to make sure that I am battling where I belong. We have a couple of weeks before Melbourne, so we will get back to work!

Josh Hill (CDR Yamaha Monster Energy) – Fifth:
It was a wild race! This format is super-quick and you don’t really have much time to recover. Although I didn’t have great starts, I managed to put myself in good positions over the first couple of laps, slowly picked guys off and didn’t make any big mistakes. To end up fifth overall was a good way to start the season being back with CDR Yamaha, my consistency paid off and it seemed like my speed was pretty good. I’m hoping at the next round in Melbourne I will be able to showcase a little bit more – the last time I raced there I was on the podium, so that’s the goal now.

Vince Friese (MotoConcepts Honda) – Third:
I had pretty good starts and sprinted really hard in the first two mains and that third one I kind of just managed the podium. I knew these guys were pretty quick all night and I didn’t really want to put up too much of a fight for that, I just secured the podium spot, as I had my eye on my teammate and a couple of the guys who were close on points with me but I got it done and I couldn’t be happier. It’s really cool to be in contention for the title but it’s just cool to even be on the podium with these two guys. It’s awesome for me and I’m trying to inch my way closer to their level. I’ve got a little bit to go but I’ve made some improvement. 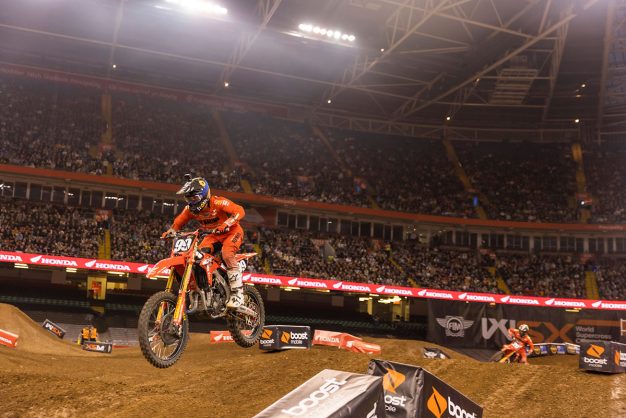 Max Anstie (Honda Genuine Honda Racing) – Sixth:
I got a heat race win and I went 10-1-11. It was carnage out there. It was so hard to pass! I am pleased that the team did such a great job with my CRF250R. Everything felt solid! I was fast all day and felt like it could have gone my way, but it was nice to get a couple of wins in front of my home crowd. We are going to come back swinging for Melbourne in a couple of weeks!

Wilson Todd (Honda Genuine Honda Racing) – Ninth:
It was a tough weekend with stiff competition. A real learning experience! I had decent starts, but just got pushed wide seeing as I had an outside gate. I ended up pulling the holeshot in the second one and held on for as long as I could. I ended ninth overall, so it was a good way to start. I cannot wait to see everyone in Melbourne!

Aaron Tanti (CDR Yamaha Monster Energy) – Fifth:
I felt good from the get-go in practice and then in qualifying I made a few little mistakes, before in the heat race I had that little tip-over and it cost me massively. The gates on the outside were so far out and, although I got awesome jumps out of the gate, the guys just beat me into the corner and it was chaotic from there. My riding was good in all of the mains and it was awesome to finish inside the top three in that last one to push me up in the points for a top-five result overall. It’s a good spot to be and I know where we stand going into the Melbourne round.

Kyle Chisholm (CDR Yamaha Monster Energy) – 17th:
My first time working with the CDR Yamaha team was awesome, as I expected, so I am really thankful for that even though we didn’t get the results this weekend. There were a few unfortunate things that happened to me, but that’s racing, and I feel like we showed what we could do in that first main event when I was able to run second for much of it. Unfortunately, I hit something in the track and got a flat tire, which caused me to go down pretty hard, and then in the second main event I got stuck in a first-turn crash. In the end, I know I can run up front and battle for the win – tonight was just crazy with so much going on! I’m happy with what we’re capable of doing, so I need to put it up front in Melbourne like I showed that we can do.

Shane McElrath (Rick Ware Racing) – First:
Winner of the first ever World Supercross Championship SX2 race has a pretty good ring to it. This was a lot of work to get everything ready to go in minimal prep time, for a lot of guys. Coming here was like, okay, we’re all kind of starting from the same level, and the track was really good. I felt good on the bike and we were really learning every time out there. Here for the first ever world supercross event has been a blast and there’s been some really good competition, really good racing between our class and the WSX class, and I’m very excited for the future of this. It’s big.

Chris Blose (Bud Racing) – Second:
I raced this format in 2019 at the Aus X Open so I was a little familiar with it but it was very similar and very chaotic, and you’ve got to be on it in the main events. I think everyone up here had one bad race and it’s just trying to eliminate those, recover in between the main events. But you know what, being here has been an awesome opportunity and I’m very thankful, and I’m looking forward to the future of the World Supercross Championship, and the many more rounds that are going to come.

Mitchell Oldenburg (MotoConcepts Honda) – Third:
I need to be smarter than that bone headed move on my part. I put myself in a bad position on the jump after the guys around me on the start flinched and I fell for it. I came around bad and in the chaos I made a bad move and I’ve got to be smarter than that. But I really enjoyed myself in Cardiff and I had a lot of fun here this weekend. It’s been a blast from the get go and I’m really looking forward to Australia.