Mix of results for Roczen in first WSX appearance 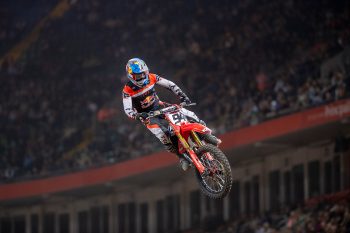 It was a mix of results for Honda Genuine Honda Racing’s Ken Roczen in his first 2022 World Supercross Championship (WSX) appearance, delivering a sensational lap to set the benchmark in superpole and notching 3-2-4 finishes in the finals.

Roczen showed early form in Wales to qualify fastest and win his heat race before posting a solid 45.874s after jumping the quad in superpole.

“In my superpole lap I wasn’t quite as clean as I wanted to be in the beginning, but the quad was huge and I wasn’t really planning on it but I saw Josh [Hill] do it,” Roczen explained. “What made it really nice though was that it set me up real nice for the turn because I didn’t have to do that single into it with how slippery it was.”

With first gate pick, Roczen grabbed the early lead in the opening final before going down in the mid-stages of the race, ultimately crossing the line third. Final two saw the German work his way from fifth to finish P2, having the speed but not track position. In the super final, Roczen ended lap one in eighth place and pushed through to complete the bout in fourth, landing him second overall for the event.

“In that first main event, obviously things happened really quick but from what I could tell there was a tiny line or ledge and the angle I was coming in on, I just wasn’t set up for it,” Roczen added. “It was so minimal but it just happened so fast. I tried to save it but I couldn’t.

“It was a bit of a bummer because it felt like it was set up to be a really good race. But it was tough out there and you couldn’t really rely on anything out on track because the berms were really flat. But it made for some great racing tonight.”

Roczen leaves the opening round at Principality Stadium second in the WSX standings to Eli Tomac, but with Tomac only a wildcard for Cardiff and not competing at round two in Australia at this stage it means the number 94 approaches Marvel Stadium in a strong position to clinch the title.

However, the intensity of the WSX format proved anything can happen throughout the races as the final round of this year’s championship takes place in Melbourne on 21-22 October.