‘I need to be smarter than that bone-headed move’ – Oldenburg 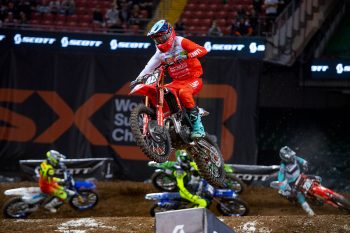 Race one and super final winner Mitchell Oldenburg has stated ‘I need to be smarter than that bone-headed move’ in the second final that cost him a shot at the SX2 overall in Cardiff.

The MotoConcepts Honda rider started his World Supercross Championship (WSX) finals charge in the best way with a commanding 3.321s victory, before his fortunes swiftly changed in the second bout.

Oldenburg was outside of the top five after the start and fell heavily in the early stages of the race after he attempted to triple a section and slammed hard into Derek Kelly (Pipes Motorsport Group) who was already committed to an inside line for the next turn.

Visibly in pain after the incident, the number 48 remounted and finished the race 19th before rebounding in super final and taking another victory. Despite his low score in final number two, Oldenburg completed the season opener in Wales third overall, just two points from the win but was left to rue that costly mistake in the second race.

“I need to be smarter than that boneheaded move on my part,” Oldenburg said following the event. “I put myself in a bad position on the jump after the guys around me on the start flinched and I fell for it.”

“I came around bad and in the chaos I made a bad move and I’ve got to be smarter than that. But I really enjoyed myself in Cardiff and I had a lot of fun here this weekend. It’s been a blast from the get go and I’m really looking forward to Australia.”

With the points tight and only two rounds in this year’s WSX Championship, SX2 title glory is well and truly a possibility for Oldenburg following his form shown at Principality Stadium as the series moves to Melbourne, Australia to conclude on 21-22 October.